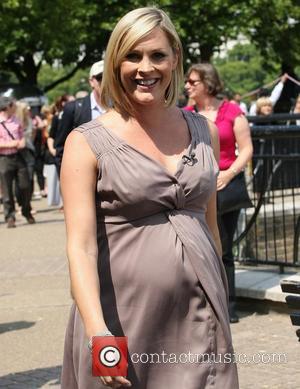 Jenni Falconer, the Scottish television presenter best known for her work on daytime show 'This Morning', has given birth to her first baby girl. Falconer and husband James Midgley announced the news on Twitter, telling followers they had named their new arrival 'Ella Rose'.
The 35-year-old presenter told her 85,000 followers she and James were "totally smitten" with their baby daughter, saying, "The wait was worth it.. our beautiful baby girl, Ella Rose Midgley, arrived last night at 12.37 weighing 7lb 2oz. We are totally smitten! X". Jenni, who recently covered Holly Willoughby's maternity leave on 'This Morning', will now take a brief hiatus from television to spend time with her daughter. Shortly before giving birth, Falconer joked with Twitter followers, "Making the most of this baby free lifestyle and having a pedicure & manicure at the hand and foot spa. Could be the last for a while!!!" Falconer and 'Cutting It' star James first announced their engagement in August 2009 after Midgely proposed during a trip to New York. The couple married a year later at the lavish Babington House retreat - guests at the ceremony included presenter Ben Shephard and Angelica Bell.
Falconer began her television career after being spotted as a contestant on reality dating show 'Blind Date'.