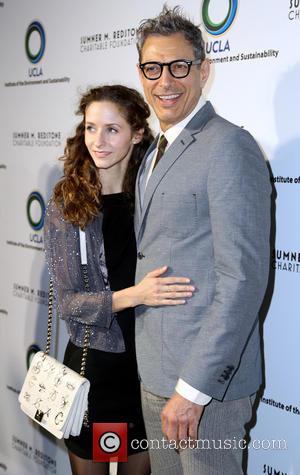 Actor Jeff Goldblum channelled his Jurassic Park alter ego as he took part in a dinosaur-themed wedding photoshoot over the weekend (begs01Aug14).

The actor starred as mathematician Dr. Ian Malcolm in the blockbuster film and its 1997 sequel The Lost World: Jurassic Park, and during his friends' nuptials in Toronto, Canada he revisited the character for an unforgettable photo.

Wedding photographer Adam Biesenthal shared the shot with The Huffington Post, which features newlyweds Pamela and Jesse Sargent and their bridal party, including Goldblum and his fiancee Emilie Livingston, running in a field towards the camera.

Biesenthal grafted an image of a giant menacing T-Rex behind the group, seemingly chasing after them as they attempt to run away.

Goldblum is preparing for his own nuptials, as he popped the question to 31 year old Livingston during a holiday in Hawaii last month (Jul14).