Jeff Goldblum has announced that he's about to become a dad for the first time, at the grand age of 62, with his new wife Emilie Livingston, aged 32. Three months in, he unveiled the news on 'The Late Show with David Letterman'. 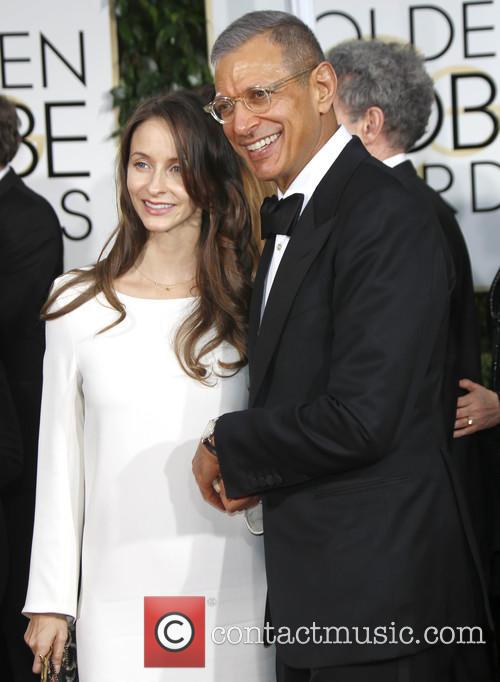 Jeff Goldblum and Emilie Livingston to be parents

'The Grand Budapest Hotel' star seemed thrilled to finally reveal the news on the chat show, admitting that gymnast wife Emilie is 'three months pregnant'. The pair have only been married since November 2014, with Jeff having become engaged to the Olympian in the summer. 'She told me the day before we got married that she's pregnant', he said happily, and even revealed to viewers that they are expecting a baby boy.

Jeff was willing to go into details about names too, admitting that: 'our current thinking is Elliot Charlie'. It will be Jeff's first venture into fatherhood, despite having previously been married twice before; to Patricia Gaul between 1980 and 1986 and to Geena Davis between 1987 and 1990.

Emilie and Jeff were wed on November 8th 2014 at the Chateau Marmont hotel in Los Angeles having been dating for three years. The bride even gave her Instagram followers a glimpse of her exquisite lace gown as she prepared for the intimate ceremony. It was earlier reported that Jeff made his proposal as they enjoyed a vacation in Hawaii.

We're glad things are going so well for the happy couple. In 2013, Jeff admitted to Broadway.com that he was 'happy as a clam with her. I feel lucky, lucky, lucky'. Things don't seem to have changed.