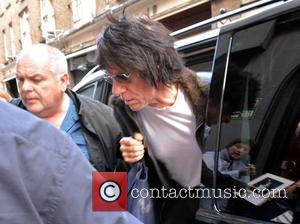 Picture: Jeff Beck - Legendary English rock guitarist Jeff Beck seen leaving his hotel ahead of his gig at The Olympia tonight, May 21. A masseuse...

Guitar great Jeff Beck has scrapped his European tour after receiving "emergency medical attention" which has sidelined him for the next six weeks.

The veteran rocker, who has struggled with health issues in recent years, was due to kick off the second leg of his trek in Austria on Friday (27Jun14), but an undisclosed ailment prompted Beck to pull the dates.

A statement posted on Beck's website reveals he will now undergo a "short hospital procedure" to treat the problem and rest up ahead of his scheduled U.S. tour with ZZ Top in August (14).

Apologising to fans for the cancellation, a representative adds, "He sends his profound apologies to those fans who had bought tickets for the European concerts and very much looks forward to playing for his American audiences after he has completed his treatment."

The 70 year old previously had to play through the pain on his joint tour with Beach Boys star Brian Wilson last year (13) after undergoing an endoscopy for another illness in between live shows.