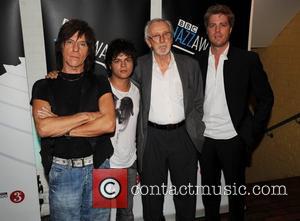 Guitar legend Jeff Beck had to re-evaluate his sound and style after attending a Jimi Hendrix gig - insisting the Purple Haze icon left him feeling inadequate.
Along with Eric Clapton and Jimmy Page, Beck is hailed as one of the most influential guitarists to come out of the U.K.
But he admits he was blown away by the musical talents of Hendrix, and confesses that the late American's style hit him like "an earthquake".
Beck tells Britain's Daily Telegraph, "The things I noticed when I saw him was not only his amazing blues but his physical assault on the guitar. His actions were all of one accord, an explosive package. Me, Eric and Jimmy, we were cursed because we were from Surrey (England). We all looked like we'd walked out of a Burton's (U.K. retailer) shop window. There was Jimi with his military jacket, his hair about 14 feet in the air, playing with his teeth. We would have loved to have done that.
"He hit me like an earthquake when he arrived. I had to think long and hard about what I did next. The wounds were quite deep, actually, and I had to lick them on my own. I was constantly looking for other things to do on the guitar, new places to take it."