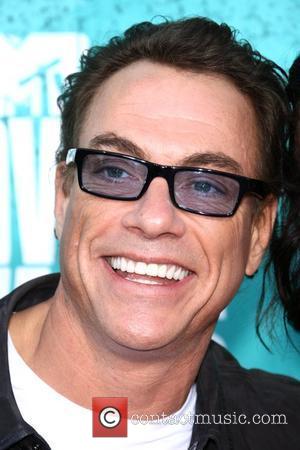 Jean Claude Van Damme was so nervous about challenging The Expendables 2 star/director Sylvester Stallone over a fight scene in the sequel, he wrote him a letter.
The Belgian martial arts star didn't want to risk upsetting his boss by urging him to rethink the sequence featuring the two action men - and so he put his thoughts down in writing.
But he had to tell Stallone to his face when he misplaced the letter during a tense trailer showdown on set.
Van Damme tells WENN, "When I read the script, the final fight was me running away from him, jumping into a helicopter and taking off and then he came (sic) in the warehouse with a chain and throws it into the propeller and the helicopter is going up, but it's chained.
"We start fighting in the helicopter, break the cockpit, the helicopter falls down and touches his leg and he's kind of stuck. Then I took (sic) a knife and escape and there's a big circle of fire and this lady is trying to shoot me. I didn't like it.
"I was in my room talking to my assistant and I was complaining and I was nervous to tell him because it's a big movie and with Sly and his temper you should just be a good boy and don't say nothing (sic) and do your job. I cannot do this. I know the fans want to see mano to mano. If you go to French, Russian or American fan club (sic), they want to see Van Damme and Sly fighting.
"Since I am a villain, I felt like, 'This is no good,' and I was complaining, yelling, this and that; everything to everyone, except to him (Stallone). So nobody will talk to Sly; they're all scared of him because he has good authority. He knows what he wants and he knows how to control the movie. So I wrote him a letter.
"I said, 'Dear Sly. You know how much I like you. I've seen the Rockys,' and I prepared such a nice letter and I'm going to give it to him in his trailer. So I knock on the door and I go inside and say, 'Hi, I know you're busy but I have a letter for you.' I start to look for this letter and I don't feel it! And I start to sweat. I said it was just a letter to explain a correction in the final fight.
"He says, 'Sit down,' and I go, 'Oh f**k it, I'm gonna tell him how I feel.' I say, 'Stallone, I think people want to see Muhammad Ali against Frasier. It's a metaphor. Look at your arms, you're strong. We need to do a fight. I need to give you myself to punch and kick the s**t out of me. And hopefully I will do some damage to you.'
"He said, 'I tell you what. Go and design the fight!' Later I look all over the place for the letter; it was stuck to my pocket!"