Watch The Throne Return! Jay-Z And Kanye West Team Up For A One-Off Show At SXSW

Three years after their collaborative tour, Jay-Z and Kanye West give SXSW festival goers a show to remember.

The rappers caused festival attendees to reach dangerous levels of excitement as they performed some incredible collaborative and solo hits at the Austin Music Hall as part of SXSW. The 4,600 capacity venue was full to bursting as fans desperately tried to catch a glimpse of their music idols three years after their legendary 'Watch The Throne' North American tour.

The rappers thrilled hip hop fans everywhere with the release of their 'Watch The Throne' album in 2011 - a record that unsurprisingly topped the US Billboard 200 chart and received some fantastic reviews from critics. Ergo, it was equally unsurprising when the subsequent 34-date tour roped in nearly $50 million and thus became the highest grossing hip hop tour since records began. 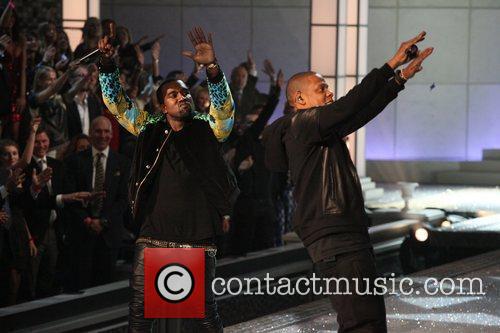 SXSW saw the return of one of our favourite rap collaborations

So when the duo got together to bellow out some of the album's greatest tracks including 'Otis' (which samples Otis Redding's 'Try a Little Tenderness'), 'N***as in Paris', 'Who Gon Stop Me' and 'No Church in the Wild', it was no wonder the crowd went nuts. The set-up was very much reminiscent of the 'Watch The Throne' tour with two high individual platforms and a mix of both solo performances and duets; according to Associated Press Kanye West entertained with 'Yeezus' favourites 'Black Skinhead' and 'New Slaves' while Jay-Z gave a rendition of 'Tom Ford' from his latest album 'Magna Carta ... Holy Grail' along with previous hits like 'Empire State of Mind' - and it looked like both Kanye and Jay were performing for the latter's 2004 hit '99 Problems'.

Since the 'WTT' tour, there have been rumours of a possible sequel to the record (or just people desperately wishing) and this latest duet show could suggest that we may be in for a treat sometime soon. On the other hand, it may have just been a brutal attempt to sabotage iTunes Festival, which was putting on its own hip hop showcases that night including Kendrick Lamar and ScHoolboy Q at ACL Moody Theater only blocks away. Kanye recently appealed to Apple CEO Tim Cook to stop asking artists to play for free at the festival, given just how financially stable the company is (or, to put it in Yeezy's words, because they're 'rich as f***').

Kanye West is not the only person Jay-Z has been performing with - he invited a 12-year-old onstage to rap during his 'Magna Carta' tour!

Whatever their reason for playing such a stand-out show, SXSW goers left the night feeling thrilled - as did sponsors Samsung, no doubt, who were promoting their new streaming service Milk Music with the concert.