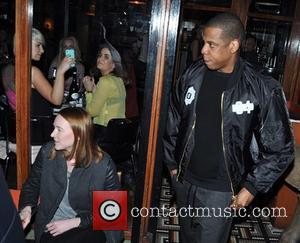 Picture: Jay Z - Beyonce and husband Jay Z leaving Mediterranean restaurant Coppinger Row in Dublin after dining out together. As he was exiting, Jay Z...

Jay Z, Kanye West, Beyonce, Rihanna and Chris Brown have been named in a bizarre $2.4 billion civil rights lawsuit filed by a prisoner in a California jail.

Richard J. Dupree, Jr. is convinced the musicians stole lyrics for over 3,000 songs he wrote while serving time behind bars, by spying on him via satellite with the aid of several law enforcement agencies, including the Central intelligence Agency, the Federal Bureau of Investigation and Homeland Security, according to Re-Tox.com.

It is not clear which songs Dupree is claiming feature his lyrics, but in the lawsuit, which he filed on 21 April (14) in California Eastern District Court, he is asking for damages and to be freed from California State Prison, Corcoran immediately.