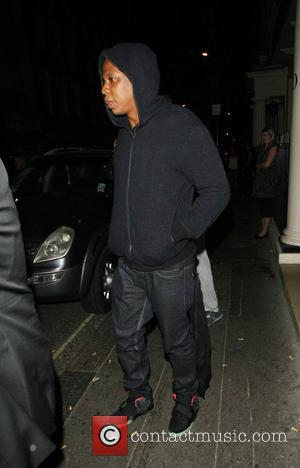 Beyonce, in a red cocktail dress, took to the stage to introduce the President, who wants four more years in the White House.

She told guests, "I can't tell you how proud we are to host tonight's event with President Obama. We believe in his vision."

Obama joked to the audience that his wife, First Lady Michelle Obama, and their daughters Malia, 14, and Sasha, 11, were "mad at me because they aren't here", before telling his hosts, "To Jay and B, thank you so much for your friendship. Beyonce could not be a better role model for our daughters because she carries herself with such class and poise and has so much talent."

He then pointed out the similarities he shares with Jay Z, quipping, "We both have daughters and our wives are more popular than we are. So, you know, we've got a little bond there. It's hard but it's Ok."

Beyonce and Jay Z, who became parents to daughter Blue Ivy in January (12), were key supporters of Obama during his 2008 campaign, and the R&B beauty performed an emotional rendition of Etta James' At Last at the President's inauguration ball in 2009.