After the success of 2011's collaborative effort with Kanye West, 'Watch The Throne', the artist also known as Shawn Carter now hits the dozen mark in solo releases.  Initially given away as part of a tie in with Samsung phones, it was certified platinum in America four days before receiving a release on more conventional formats. 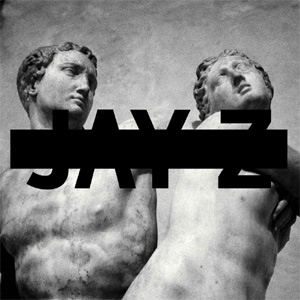 With Jay-Z having featured on Justin Timberlake's recent comeback material, the former 'N Sync man returns the favour and opens 'Holy Grail' with a superb choirboy-esque chorus.  The main man's own contribution unfortunately lacks in comparison; there's no killer lyric and he resorts to quoting Nirvana's 'Smells Like Teen Spirit' - just about getting away with it.  This sets the tone for the remaining 15 tracks on which the guests push Jay-Z to the background.  In their absence, he fails to get anywhere near the admittedly exceptional standards he set himself on 2001's 'The Blueprint', instead sounding lacklustre over the expected top class beats he is provided with.  'Picasso' is the first example of this; a great rock-orientated under layer is the foundation to art-related lyrics that fail to connect, whilst 'Crown' appears to have more electro-beats than verbal contribution.  When he does perform, the content rarely strays from the staples of the genre - money, women, success - and perhaps it is because he has been successful for so long that he now struggles to make them and, more importantly, himself sound interesting.  It is not until the final song, 'Nickels And Dimes', that he recaptures the fire that brought him attention originally and it is no coincidence that it is here that the boasts are set aside to be replaced by musings on philanthropy and money struggles.

So what of the other featured artists who provided a lift to proceedings?  Frank Ocean's turn on the blustery brass of 'Oceans' provides a seductively smooth hook, but it is the almost-obligatory appearance of Mrs Carter aka Beyoncé that stands out.  Set in mid-tempo R'n'B balladry, 'Part II (On The Run)' is actually quite a sweet declaration of love for one another.  By not using clichés they comfortably avoid the pitfalls of coming across in a nauseating manner, instead expressing a reciprocated gratefulness for looking beyond reputation and finding the person behind the image.  It's far from the typical Jay-Z track within his extensive catalogue, but that is perhaps part of the reason why it is one of the better pieces on 'Magna Carta. Holy Grail'.  Some may accuse him of going through the motions on the record, but equally possible is that he's run of ways to rap about the same old subjects.  Hopefully, next time around he'll recapture the inspiration that put him at hip-hop's top table, a seat he should vacate going on this output.