Congratulations, Mr President: We just had to start here this week. President Barack Obama elected for a second-term in office. Though we always had inklings Mr Obama would get back in, did his showbiz pals Jay Z, Beyonce and George Clooney help him secure the keys to the White House for another four years? 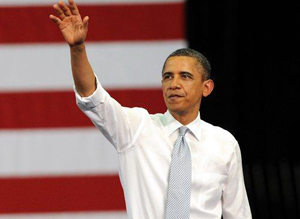 Nobodies Business: Despite the dodgy spelling, Rihanna sent fans a little crazy this week by announcing Nobodies Business, a collaboration between herself and Chris Brown that features on her forthcoming album Unapologetic. Browsing over the track-listing, the entire record could be Chris Brown-themed. We shall see.

Harrison as Han, again? Star Wars fans are probably a little uneasy about this one. Harrison Ford has reportedly confirmed he would be open to returning as Han Solo in Disney's forthcoming Star Wars Episode 7. Check out what he said, exactly, and make your own mind up.

Vaughn ditches Marvel for Disney? In other Star Wars Episode 7 news, it's been rumoured that Matthew Vaughn could direct the film. It would certainly explain why he's dropped out of taking on the huge project of helming the forthcoming X Men movie. 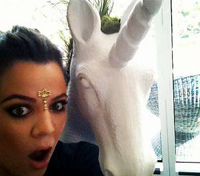 Shame, as she was doing a pretty good job up there. Nevertheless, the rarely shy reality star brushed it off, tweeting, "I think I had a little nip action earlier LOL."

Catch Him If You Can: Having trouble keeping track of Leonardo Dicaprio's girlfriends? Us to. This week, the Wolf of Wall Street star reportedly split with Erin Heatherton, his latest supermodel squeeze.

Twilight of her career? It was good to see Robert Pattinson and Kristen Stewart back on the Twilight promotional rounds this week, though perhaps better for fans of the franchise was news that Stephenie Meyer may not be done writing the bestselling vampire books just yet!

Big Miracle: Huge congratulations to Kristen Bell and Dax Shepard this week, who have proved young 'showbiz' relationships really can work out well. They've been together for five years, engaged for three, and now they're expecting their first child!

All Roads to Washington: Could the Oscar for Best Actor be whinging its way to Denzel Washington? It was certainly pleasing to hear the critics unanimously praise the Hollywood legend's turn in new movie Flight, and the studio has really stepped up its efforts to get the movie into the minds of the Academy.

Video of the Week: This week's hottest footages comes from Hollywood, where Spider-Man actress Emma Stone is a little taken aback by all the flashbulbs after leaving a Hollywood salon. Unsurprisingly, the actress takes it all in her stride, even chuckling at a joke made by one of the photographers.