Actor Jason Segel Joined A Book Club To Help Him Research His Role As David Foster Wallace In The End Of The Tour. 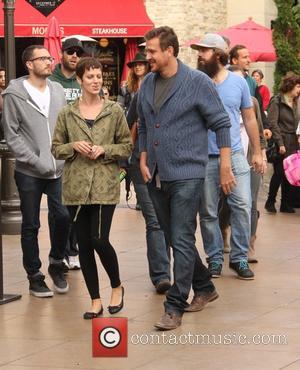 The Forgetting Sarah Marshall actor portrays the Pulitzer Prize-nominated writer, who committed suicide in 2008, and decided to read Wallace's Infinite Jest to help him better understand his character.

On the advice of a local bookstore owner, Segel joined a book club to help him get through the long novel and he ended up gaining more of a perspective on Wallace, the novel and life lessons than he had initially thought.

He says, "Infinite Jest is this 1,000-plus page book. I read it for the movie; it's really hard to tackle. I luckily had some dudes at my local book store when I bought it, I asked them, 'How long should I give myself to read this?' and they were like, 'First time?' and I said, 'Yeah, first time,' and they said, 'Well, we do a book club if you would like to join us.' Every Sunday I would get together with these three grown men and we would talk about this book...

"To be serious about it, what really struck me was the book is really special, I think, for people of a certain age. You're sort of told when you're really young if you just achieve this stuff, you're gonna feel good and you reach a certain age where you realise, 'Oh, I've been trying to get there and I'm starting to think there's no there, like this just goes on forever and I better make friends with life.' So it was like, four dudes talking about that and it said a lot about David Foster Wallace to me, that he could do that. It was really great, I just feel really lucky (to have played him)..."

The End of the Tour centres on a road trip Wallace took with Rolling Stone reporter David Lipsky in 1996, and is based on the book Although Of Course You End Up Becoming Yourself: A Road Trip With David Foster Wallace.