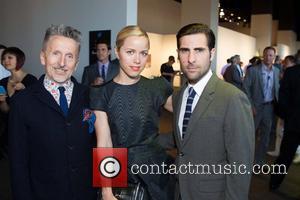 Actors Jason Schwartzman, Charlie Sheen and Bill Murray shot their new movie at director Roman Coppola's house in an effort to cut down on filming costs.

The comedy Glimpse Inside the Mind of Charles Swan Iii was shot on a shoestring budget in just 23 days and Schwartzman reveals they took extra measures to make sure no money was squandered.

He tells New York Magazine, "The really fun thing was that we only had 23 days to shoot on a very small budget - we were shooting it at Roman's house. He bought most of the costumes himself on (online auction website) eBay.

"With a movie with a little more time and money, all day long you'll be in (the same) outfit, but, on a movie like this, you're shooting so much in one day. So, like, in the morning, I'm dressed as (samba dancer) Carmen Miranda, putting this thing (on my head) and putting on heels, then I'm dressed like Liberace and they're shoving pie in my face, then I'm dressed as a cowboy."

But Schwartzman insists he had a great time on set with Sheen, continuing, "He's awesome. He's supersmart - he has an encyclopedic knowledge of movies!"

And he adds Murray is always a pleasure to work with, too: "He's a very sensitive man in that he always wants everyone to have a crack at the moment.

"He has a really good sense of harmony. Not singing harmony. But like, 'Hey that person hasn't talked in a while - what are you thinking about right now?' Even in conversation, he wants everyone to be equally involved. He just loosens up a room and gets everyone excited. He really knows how to get in there and shake up your jelly."

Schwartzman and Murray have teamed up for a handful of quirky movies including The Darjeeling Limited, Moonrise Kingdom and animated hit Fantastic Mr. Fox.