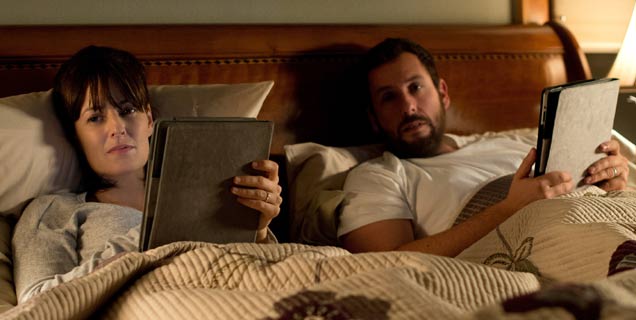 With one of Kate Winslet's most layered, resonant performances, this film is definitely worth a look, even though the indulgent filmmaking style pushes it perilously close to Nicholas Sparks-style sappiness. Clearly, writer-director Jason Reitman (Juno, Up in the Air) is shifting gears as a filmmaker, but the movie is in dire need of just a hint of his usual jagged wit.

It's set in 1980s New Hampshire, as the agoraphobic Adele (Kate Winslet) is struggling to raise her sensitive teen son Henry (Gattlin Griffith) on her own after her husband (Clark Gregg) left. Then one night escaped convict Frank (Josh Brolin) arrives at their house in need of a place to hide. The next day, Frank offers to help with some repairs on the house. He also notices that Henry needs to learn how to throw a baseball. And that Adele needs some affection. So over the long Labor Day Weekend, he becomes the badly needed man of the house. Then when a neighbour (J.K. Simmons) and a cop (James Van Der Beek) start snooping, they make a plan to run for the Canadian border.

Instead of a dark, menacing edge, Reitman washes the film in sun-dappled earnestness, ramping up the soapy emotions rather than the grittier issues these people so badly need to deal with. This reaches a low point when Frank teaches Adele how to bake a peach pie in a scene reminiscent of the lusty pot-spinning sequence in Ghost: laughably ridiculous. Fortunately, Winslet and Brolin generate some uneasy chemistry, and Griffith is a fine young actor in a very difficult role. Together, they pull the film back from the sudsy brink just in time for a genuinely tense final sequence.

When Adele Wheeler lost her husband, her life started slowly deteriorating. Suffering from depression and having developed a slight tremor, she is rarely able to leave the house except for emergencies. When she finally has to face the streets to go last minute shopping with her 13-year-old Henry, they meet a scary-looking injured man named Frank who requests a lift to their house. Too frightened to argue, they accept and later discover that he is an escaped prisoner wanted for murder. However, the mother and son can't help feeling less and less frightened as the hours pass by when he shows them remarkable kindness, despite insisting on tying them up for his and their own safety. It's not long before Adele falls in love again and she, Frank and Henry embark on a dangerous adventure together to finally escape a world that has become so cruel to them - but will the threesome get away before the cops get suspicious?

This romantic drama is set in 1982 and is based on the novel of the same name by Joyce Maynard and has been written and directed by Jason Reitman ('Thank You for Smoking', 'Juno', 'Up in the Air'). 'Labor Day' made its premiere at the 2013 Telluride Film Festival and is set to be released in the UK on February 7th 2014.

The Coen Brothers, Alexander Payne and Robert Redford are among those attending this year's Telluride Film Festival, premiering their latest movies in the Colorado mountains for an event dedicated to the memory of filmmaker Les Blank, film critic Roger Ebert, entrepreneur George Gund and author Donald Richie.

It's actually the first time the Coen's have visited Telluride and they'll be screening their latest Oscar tipped movie Inside Llewyn Davis. Alexander Payne brings his equally anticipated Nebraska, while Jonathan Glazer's Under the Skin, Ralph Fiennes The Invisible Woman and Redford's All Is Lost also screen.

However, much of the talk ahead of the festival focused on Jason Reitman's drama Labor Day, which also screens at the Toronto International Film Festival next month. It stars Oscar winner Kate Winslet as a struggling mother and her son who accidently bring an escaped prisoner into their lives.

Kate Winslet is to become a mother for the third time!

Oscar winning actress Kate Winslet is pregnant with her first child to husband Ned Rocknroll. The 37-year-old will become a mother for the third time - she is also a parent to 12-year-old Mia with her first ex-husband Jim Threapleton and 9-year-old Joe with her second, Sam Mendes.

Winslet tied the knot with the fantastically named Ned Rocknroll in December after a year and a half of dating. He is the nephew of billionaire Virgin mogul Richard Branson. The actress had never ruled out having more children and told InStyle back in 2006 that she was "hoping to have more kids...I don't know whether one or two. Oh, God, I would love to have more."

Incidentally, Winslet's recently wrapped up filming the Jason Reitman-directed drama Labor Day in which she plays a depressed single mother who offers a wounded escaped convict a ride. As police search the town, the mother and her young son gradually learn his true story as their options become increasingly limited. The movie also stars Tobey Maguire and Josh Brolin and hits theaters on January 31, 2014.

By Rich Cline
Excellent
There isn't much on the surface of this prickly comedy, but the sharp script slices through American culture so astutely that we continually see ourselves in characters who are clearly losers. And the film gives Theron another terrific role to disappear into.

Mavis Gary is the ghostwriter for a successful series of young adult novels entitled the Waverly Prep series. Lately, though, the books have been lagging, so the publishers have decided to cancel them. Mavis has almost finished what will be the last book in the series but is struggling with the last chapter. She is also struggling with more personal issues in her life: she has a drinking problem and longs to relive the glory days of high school, where she was a popular cheerleader and dating the resident 'It' boy, Buddy Slade.

The New York premiere of Young Adult was held at the Zigfield Theater. Director Jason Reitman, who looked proud as he stood on the red carpet, in front of the promotional posters. The writer, Diablo Cody, was another member of the production team who walked the red carpet. She wore a black dress with sheer sleeves that showed off her tattoos. But it was Charlize Theron who stood out, in an eyecatching, bright red dress.

Young Adult is about a newly divorced author who heads back to her hometown to pursue a relationship with her ex, who is now married with children.

The big winners at the awards ceremony were: Felicity Jones (Like Crazy) for Breakthrough Actor; Dee Rees (Pariah) for Breakthrough Director; Better This World for Best Documentary; Scenes of a Crime for Best Film Not Playing At A Theater Near You and both Tree of Life and Beginners for Best Feature.
1 2 Next »
Jason Reitman