Singer Jason Mraz Is A Married Man After Secretly Exchanging Vows With His Longtime Girlfriend In Virginia. 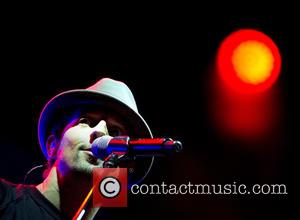 The I'm Yours star wed Christina Carano in an intimate outdoor ceremony at the Historic Polegreen Church in Mechanicsville on Sunday (25Oct15), with an estimated 50 guests in attendance, according to Eonline.com.

The groom announced the news by sharing a photo of his bride, wearing a long-sleeved, high-collar lace gown, standing in the aisle at the picturesque venue on Twitter.com.

"Today I was made the luckiest man in the world," he captioned the shot.

The new Mr. and Mrs. Mraz met in 2007, but only began dating in late 2011 after Jason split from his former fiancee, singer/songwriter Tristan Prettyman.

"After several years of crushing on him, the stars finally aligned - and now he's my stud," Christina previously gushed to The Osider magazine. "We've created a really awesome life together and we make a great team.

"He's the most loving, generous, and most hardworking man I know. These are the most attractive qualities I could ever ask for in a partner. He inspires me and empowers me every day to live my best life and he cares so deeply about the things that really matter. We're truly blessed in so many ways."