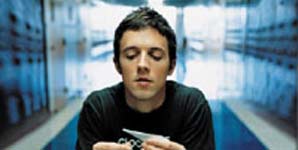 Jason Mraz has a gorgeous voice, his style is an eclectic mix of pop, folksy country, a hint of rock, and what I think shines through all this, jazz. Aged 29 this year he has been playing guitar for 10years, originally from Virginia he has worked mostly in San Diego after studying musical theatre in New York.

Mraz is a talented songwriter, with easygoing lyrics and a catchy enjoyable quality. The album, 'Mr. A-Z', taking a year to make is his second, a sequel to 'Waiting For My Rocket To Come Home'. It doesn't get uninteresting through the 12 tracks as each adds a different edge to the artist, however, the CD would make good background music due to such a soft and relaxing tone.

My favourite of the album is 'Clockwatching' due to the breaks in the rhythm from the guitar. The song off the album which sums up Mraz's character would have to be 'Wordplay', lyrically it is appealing, and the voice compliments this. Very appealing!

Jason Mraz has toured with Alanis Morriset and the rolling stones and has also worked with Bob Dylan, Dave Matthews Band, Paula Cole, and Jewel. Later this year he will be touring with James Blunt. He is currently on tour in the UK until mid March, check out his official website for dates and venues.