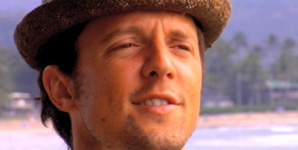 Jason Mraz, the American-based singer songwriter has been a commercial success in the USA since the release of his second album, Mr A-Z. However, it was his new album 'We Sing. We Dance. We Steal Things' released in 2008, and more specifically the hit single 'I'm Yours' that brought him to the attention of the British public. Having received critical acclaim for his album (including three Grammy nominations) Jason is now part way through a mammoth world tour. Contactmusic.com caught up with him backstage at the Hammersmith Apollo before the second of his sell out gigs.

Reclined on the leather sofa, fiddling with his trademark trilby hat, you couldn't meet a more laid back person. It seems he is in his element when playing live and last night's gig was no different 'I think it was our funniest gig, we were all just laughing the whole time, having a great time' he beamed. Jason plays with a live band and a full brass section, making his gigs a real experience; but his main aim is for the music to have a positive effect on the audience, bringing them together. 'I want people to come to the concert and feel they are part of a community and that their lives are worth celebrating'. It seems it's a two way thing, because getting a positive response from the audience lifts the band. 'You leave at the end of the night feeling great, thinking they're buzzing! You start a little ripple effect - positivity'

But following the success of his second album, Jason became disillusioned with the constant cycle of recording and touring associated with being in the spot light - 'I had lost all interest in making music; I lost interest in touring.that's not right'. So he decided to take a complete break from the music industry and focus on doing 'normal human activities'. He spent time relaxing, gardening and playing music in coffee shops in San Diego where he started his music career. This began the grounding he needed, 'Right away I was refuelled to do it all over again' he explained. And this time round he was insistent that there would be no deadlines from the record company and no pressure from management because he felt that would hinder the creative process. '.that makes me feel like I'm not writing from the heart and I'm writing for something else'. It clearly had the effect he had hoped for and he wrote 'We Sing. We Dance. We Steal Things'.

He describes the album as a 'sunny optimistic upbeat record, reminiscent of that California groove', yet it was recorded in Kensal Rise in London. The main reason behind this was that he wanted to make the album with Martin Terefe, a producer with whom he had worked for a number of years and who is well known for his work with Coldplay and James Morrison. Keeping the album acoustic was important to him, yet the sound needed to be easy to transfer to the live setting 'With Martin we found a way to keep it acoustic but with just enough pizzazz'. The album also has a certain quirkiness to it, using real answer phone messages from a friend on one of the songs and a children's choir on another. These were Jason's idea but where some producers may have been reluctant to include them, Terefe was quite the opposite. 'Martin was the perfect producer to love all the quirks and help me create more.he was the one who bought his son's third grade class into the studio!'

Musically, he is influenced by almost any genre 'I steal from everybody' he laughs. He grew up listening to the radio, so was into 80s and 90s pop, then moved onto troubadours and jazz and is now becoming interested in world music. Keen for the music he produces to keep evolving, Jason tries to use all of these influences when he is writing in order to 'bring new rhythms and melodies into my thought processes' The album is a collection of very personal songs built on his own experiences, so what sort of thing influences his music? 'Any relationship with a person tells a story.often it's really profound...to me that makes great material' By writing about experiences and people that have influenced him, he hopes that his music will be more than just words and melodies and will also be an inspiration to people. 'I've had many great teachers throughout the relationships I've had, been seated in front of some great minds. Whenever I feel like some sort of life changing philosophy, that's when I want to make music' he says. 'I think, God, if it makes me feel this way, if I can infuse this with melody, maybe I can make other people feel this way'.

Well known for this poetic wordsmith style, Jason has an innovative way of keeping the lyrics he writes fresh. He and his friends have song writing challenges; someone will suggest a word or phrase and the idea is that they then have to turn that into a song. 'Song writing is a practice and the more you do it, the better you get.this is a way to keep practicing and have a buddy check up on us!' In fact, he says that over half the songs on his recent album were born out of this particular game. But for Jason, it is just as important to keep having real life experiences, so they can form the basis of his songs. He hopes that after the tour he will go back to playing in his coffee shops and he's confident that his celebrity status won't affect that. 'They don't care about all this' he says gesturing around the large dressing room 'They're like, hey you've been gone a long time! It doesn't matter if I'm wearing a hat or being Jason Mraz, I just better show up with some real music!'

On the album Jason duets with the likes of Colbie Caillat and James Morrison, and he hopes to use any spare time he gets on the tour to continue to work with other artists. 'It helps me see how they approach the creative process but more importantly it helps me see how they're just dealing and how they're living their life as a songwriter' His long time wish though, has been to work with Willie Nelson and he is hopeful that this will happen after the tour. Jason is also busy writing material for his new album. Although he will be enjoying a couple of well earned retreats, he is keen to finish writing the album as soon as the tour ends '...we started touring it (WSWDWST) and celebrating it and living it, so it's easy to keep that vibe going into new material' and he aims to start recording it early next year.

With the new single Make It Mine out on April 13th, the world tour rolling on and the prospect of a new album, Jason is keen that he doesn't fall into the trap he did after his second album. He keeps himself grounded by creating a community around him and surrounding himself in grounded people. 'I want to stay grateful, stay present; I don't want to lose myself in this. I want to be myself in this' and it seems he's doing just that.