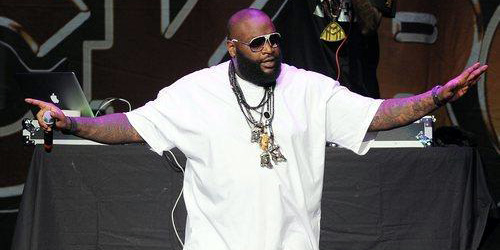 Rick Ross Survives An Attack, Jennifer Lawrence Wins But Slips Up, Lindsay Lohan To Learn Her Fate In LA

You Da Boss: Rapper Rick Ross had a lucky escape this week, somehow avoiding a hail of gunfire aimed at his Rolls Royce in Miami. The Diced Pineapples hit-maker ploughed into a nearby apartment block but emerged relatively unscathed. Now who would want to kill Rick Ross?

Silver Lining? Jennifer Lawrence's Christian Dior dress let her down badly at the SAG Awards in Los Angeles on Sunday evening. The Silver Linings Playbook star made her way to the stage to collect the award for Best Actress, only to see her gown literally split in the middle! What caused the wardrobe malfunction?

"The Truth Will Come Out": Jason London's Face Broken In Fight, But Who Started It?

By Lorna Greville  in Lifestyle / Showbiz on 30 January 2013

Yesterday it was reported that Dazed & Confused star Jason London was beaten at a club in Scottsdale, Arizona. Conflicting accounts of how the fighting began make it difficult to ascertain why London's face became such a mess, but while the bouncers at the club claim London threw the first punch, the actor's knuckles tell a different story.

According to one of the bouncers, London sneezed in his face, refused to apologise and punched him, which lead to the blood brawl. However, as far as London is concerned he was accused of looking at a girl which ended up in a fight. According to TMZ Jason walked away with a sinus fracture, multiple contusions, a haematoma, abrasions and a concussion. He's now in hospital.

A rep for London said: "Jason's injuries are consistent with a brutal attack with deliberately and expertly aimed landed shots to the head which, according to eyewitnesses, continued even after he was unconscious."

Continue reading: "The Truth Will Come Out": Jason London's Face Broken In Fight, But Who Started It?

By Contributor in Lifestyle / Showbiz on 30 January 2013

Dazed And Confused star Jason London has taken to Twitter to give his side of the story, after being arrested in Arizona and charged with assault and disorderly conduct. If that wasn’t bad enough, he was also charged with defecating in a police vehicle whilst on his way to jail. Grim.

The Daily Telegraph reports that London – who played main character Randall ‘Pink’ Floyd in the 1993 comedy – was at the Martini Ranch Bar in Phoenix’s Scottsdale on Sunday (January 27, 2013) when someone complained that the actor had sneezed on him. Instead of apologizing, London apparently punched the person in question and was subsequently escorted out by security. He also chose to attack the security, who opted to defend themselves against the actor. On Twitter, London has claimed that he was the one who’d been attacked. "I would never say or do the crap they are reporting," he said in the message on Tuesday (January 29, 2013).

"Have faith in me. The truth will come out and you will see." He added  “Wait till you see the real pictures. I have a right orbital fracture and sinus fracture. The truth will win. Some guy thought I was hitting on his girl and had me jumped. My wife was in the next room, had no idea what even happened. I hate Arizona." We can’t imagine Arizona’s too fond of him either.

By Michael West in Lifestyle / Showbiz on 30 January 2013

Actor Jason London was arrested following a scuffle at the Martini Ranch bar in Scottsdale, Arizona, at 1.40am on Sunday morning (January 27, 2013), leaving the Dazed & Confused actor with a pretty nasty looking black-eye.

Upon arriving at the scene, cops found Jason nursing a battered and bruised face. The bouncer at the club claimed the actor had walked by him and sneezed in his direction. The bouncer asked for an apology, though Jason punched him in the face instead. Of course, London was given a serious beating and thrown out of the club kicking and screaming. Anyway, the night doesn't end there, unfourtnately.

Paramedics arrived on the scene, though cops say the actor got aggressive with the responders and shoved them. One officer was forced to deliver a "knee strike" to Jason's right thigh so they could seat him on the ground. He called one of the officers a "f*cking hillbilly." On his way to the police station, London offered up a homophobic slur, saying, "Guess what fa**ot?  I f***ing love this.  I f***ing own you guys so hard.  I'm rich and I'm a motherf***ing famous actor!  F***ing look me up, bitch." Jason continued, "It smells like s**t in your car and your breath smells like diarrhea," before leaning over and crapping in his pants, adding, "I told you I'm happy as s**t."

"I Hate Arizona": Jason London Denies Claims He Defecated In A Car And Blames 250lb Bouncers

By Lorna Greville  in Lifestyle / Showbiz on 30 January 2013

Jason London is looking distinctly worse for wear, not just because the Dazed & Confused actor has just passed to 40 mark, but also because he was beaten up in a bar fight, and subsequently 'crapped himself' in a cop car, reports TMZ.

While we never want to trivialise violence, the scenario described by the police sounds eminently comic. It goes something like this: a drunk Jason London walked past a bouncer nursing a black eye. While walking past him, he sneezed right on said bouncer. The bouncer, understandably, asked for an apology, but rather than doing the police thing, London simply punched him. In the process of being removed from the bar 'kicking and screaming'. After hurling homophobic slurs at the officers he told them that he was rich and a 'motherf***ing famous actor'. He then proceeded to relieve himself in his pants.

Since the initial reports, London himself has spoken to TMZ vehemently denying the claims. "I got jumped by three 250 pound bouncers. They knocked me out and beat me for several minutes. I would never say or do the crap they are reporting. Have faith in me. The truth will come out and you will see."