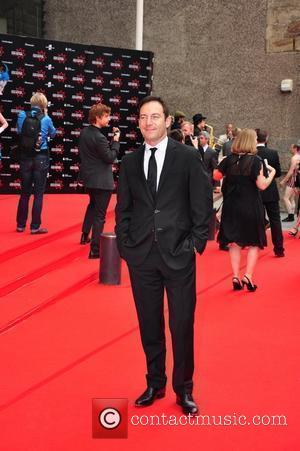 Jason Isaacs has thrown himself into training ahead of a fight scene with Taylor Lautner in upcoming movie ABDUCTION - because he doesn't want the young actor to make him "look like an idiot".
The Harry Potter star begins filming the new thriller with the Twilight hunk later this month (Jun10) and he's worried because one scene will see him tackle the 18 year old in a boxing sequence.
And 47-year-old Isaacs admits he is working hard to get fit before he takes on the youngster onscreen.
Speaking at the Edinburgh International Film Festival, ahead of the screening of Skeletons, he tells WENN, "Next week I'm doing Abduction with Taylor Lautner... and I've been kickboxing every day... from seven o'clock in the morning... because I have to have a long boxing sequence and I don't want to look like an idiot.
"He (Lautner) has the most famous abs in the world and he's a fabulous actor but he's also got the body of almost every woman between 14 and 100's dreams. He's turned overnight as the object of lust for over half the planet. I'm very conscious of the fact because we have this extended fight sequence and it is one of the main things I do in the film and he will probably be really good at it.
"He's young and supple and electric in his body and I will be struggling."