Jason Derulo Has Vowed To Travel By Private Jet In Future After He Was Escorted Off A Flight To Los Angeles Over The Weekend (15-16aug15) Due To A Dispute Between His Bodyguards And Airport Employees. 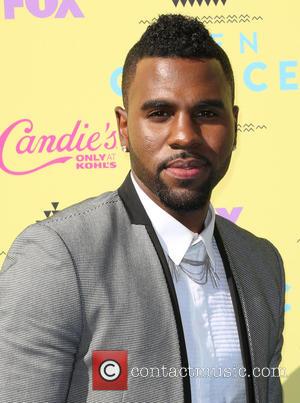 The Talk Dirty hitmaker was preparing to take a Southwest Airlines flight from Reno, Nevada on Saturday (15Aug15) when one of his security staff was reportedly refused preferred boarding, sparking a stand-off between the singer's team and airline employees.

The group was later escorted off the plane, and Derulo chartered a private jet to get back to L.A.

He attended the Teen Choice Awards as planned on Sunday (16Aug15), and set the record straight about the incident in an interview with Entertainment Tonight, saying, "It was a little mishap. Basically, there was a little confrontation with the people that work at the front. We were literally just trying to not cause a ruckus. My security was literally just trying to tell the agent, 'Can we go to this section so we don't cause a ruckus?' There's a lot of picture taking and that stuff going on. They weren't being very accommodating... One of the guys (Southwest employees) came on the plane, and one of my people were like, 'You're full of s**t.' They were like, 'You guys got to get out of the plane (sic).' They kicked us all off the plane.

"I had nothing to do with it. I didn't say anything to anybody. So they kicked me off a plane. Southwest, you got some problems! But it's all good. I learned from the experience. And I'm getting myself a jet so I won't have that problem."

A representative for Southwest Airlines says in a statement, "According to our employees, the group refused to follow boarding procedures. Initial reports indicate that several customers complained about the group's behaviour.

"Our crew, responsible for the safety and comfort of all customers on board, attempted to diffuse the situation; ultimately, local authorities were called and the decision was made to deny boarding to the group. The group sought alternate transportation and their tickets were refunded."