Singer Jason Derulo Jokes A Crazy Party Held At His California Mansion Could Land Him "In Jail For Eight Years". 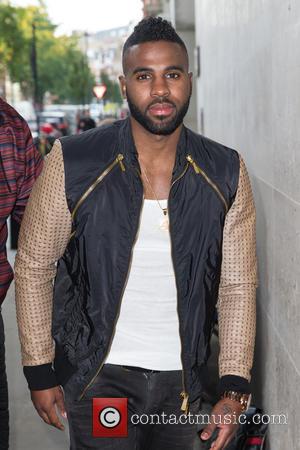 The 26-year-old Talk Dirty hitmaker broke up with his longtime girlfriend Jordin Sparks in 2014 and since the split he has been enjoying life as a bachelor.

But Jason's single antics may have caused him a lot of trouble, as police officers interrupted his 26th birthday party last month (Sep15), which was held at his $3 million (£2 million) mansion in Tarzana, California.

"I had a party at my house and it was pretty crazy," he told UK newspaper The Sun, noting the event has led to legal problems. "I gotta go to court. I might be in jail for eight years. They'll go, 'What you in for?' 'Erm, noise complaints. But if y'all wanna throw a party, holler me!'"

Jason went into further detail about his night of mischief, noting most of the women in attendance were donning sexy bikinis.

Even though they were having a raucous time, he still doesn't understand why police felt the need to come barging in.

"I threw it with my friend The Game," he explained. "Girls could direct message promoters to get to the party and those promoters would decide who they wanted to come.

"It was fly, we were having a lot of fun. Then all of a sudden a helicopter starts circling my house. I'm like, 'What the f**k?'

"An hour later 50 police officers come barging in. Because of noise complaints. But I don't really have any neighbours close by. I was like, 'Is this really necessary? This is embarrassing'.

"Then we had a night swim. Me, my brother, The Game - six guys and then 40 women. It was crazy. Us guys don't know how to party as good as women, they're so much better at it. I didn't tell them to leave. I basically went upstairs."

Although his party habits have caught the attention of cops, Jason has no intention of letting up anytime soon.

While in London, he plans to continue having wild fun.

"We drink a lot more here than in America," he noted. "Alcohol is good for you. It thickens the blood. I was going to ask you for some."