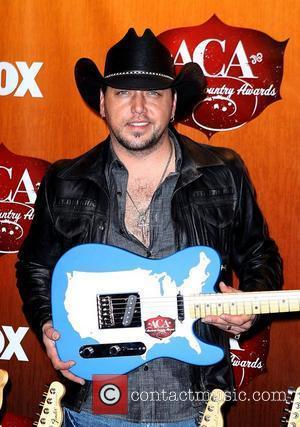 It was Jason Aldean 's night at the 2011 American Country Awards in Las Vegas on Monday (December 5, 2011), walking away with six awards including Artist of the Year and Record of the Year for 'My Kinda Party'.

In addition to the big two gongs, the country star also scooped awards for Touring Artist of the Year, Male Single of the Year, Vocal Collaboration Single of the Year and Music Video Collaboration of the Year for 'Don't You Wanna Stay', with Kelly Clarkson, according to MTV News. On his way to a 75 per cent success rate (he was nominated for 8 awards in total), Jason told the audience, "This is getting a little ridiculous now.I don't know what else to say. It's been a crazy year". Although the night clearly belonged to the 34-year-old, from MACon, Georgia, CARRI E UNDERWOOD also had a strong return, scoring wins in the categories of Female Artist of the Year and Female Single of the Year, while her fellow American Idol alum Scotty Mccreery earned the gong of the New Artist of the Year. The wins for Underwood come after she had to watch Taylor Swift and Miranda Lambert take the top two awards at last month's Country Music Association Awards.

Jason Aldean stormed onto the country music scene in 2005 with his self-titled debut album. Producing three hit singles, the album was quickly certified platinum by the RIAA, while his follow-up 'Relentless' went gold.