Cocker Hints Pulp Reunion Is Over 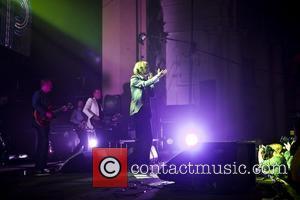 British singer Jarvis Cocker hinted that his reunion with Pulp is over during the band's last gig of its summer tour on Sunday (04Sep11).
The 1990s Britpop icons announced last year (10) they would be reteaming for a string of shows, and began the first of their comeback gigs in May (11).
The band performed successful sets at U.K. music festivals Glastonbury, Leeds and Reading - and on Sunday they wrapped up the trek at Ireland's Electric Picnic festival.
Frontman Cocker suggested during the set that the group may never perform together again, telling the crowd as he launched into the closing song Common People, "This is the last gig of the tour, so (if) we start crying or get emotional, you'll understand... This may be the last time we're ever all on stage together again."