Review of Jarvis Cocker live at The Troxy on 17th June 2009. 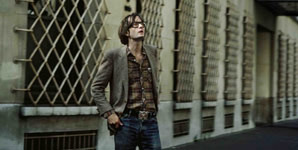 With the triumphant return of Blur this summer, Britpop nostalgia is at a high, but ex-Pulp front man Jarvis Cocker confidently stuck to his new material as he entertained the crowd at London's Troxy. Dressed in a cream jacket and beige cords, he was rocking the look of a cheeky supply teacher - even threatening the audience with his cane!

Cocker was on form and the banter with the audience was almost constant; he kept to the school teacher vibe, quizzing the crowd about Icelandic independence day and dishing out random facts -'Did you know that Limehouse was the source of the first outbreak of cholera in the UK?' he asked.

But it was the music people were there for and he kicked off with the bold instrumental Pilchard. It was typical of the big, guitar based indie-rock sound that makes up his second album, Further Complications. And it was songs from this new release that made up the majority of the set. The shimmering indie guitar and audience accompaniment on Slush sounded even better live as did the brilliant self deprecating I Never Said I Was Deep. His eccentricity is endearing; who else can go from the epic saxophone on Homewrecker to the front man playing the recorder ('the whitest instrument we could find') on Caucasian Blues to bemused fans?!

In trademark style, snake-hipped Cocker writhed and jerked around the stage with a strange sexiness that only he can master. Although there was a certain nostalgia in watching him perform, he only seems to have improved with age as he flung his lanky frame around with a renewed energy! It was clear that there was a definite anticipation from some hoping to hear a Pulp classic. Shouts of 'Es and Wizz' and 'Common People' were ignored by Cocker, though he did treat the crowd a couple of his older solo favourites; Black Magic getting the biggest reaction of the night. The encore saw him finish with a rousing rendition of You're In My Eyes (Discosong) and as the glitter ball sparkled, you realised that the tired art deco hall was actually the perfect venue for the return of this retro member of indie royalty.

Despite his constant references to his age, Cocker seems to have a new found energy and identity to his music. This coupled with his eccentric style, witty, intelligent lyrics and cheeky double entendres proves that he still has what it takes. Instead of relying on old material and nostalgia, Jarvis Cocker is leading the way with his solo career and if his new album and the performance at the Troxy are anything to go by, let's hope he continues to do so.