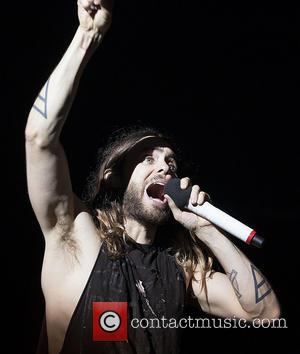 Celebrities including Jared Leto and actress Marlee Matlin have expressed their concern for the people of Chile following the news of a major earthquake in the region.

The 8.2 magnitude tremor struck off the coast of Chile on Tuesday evening (01Apr14), killing at least five people in the country and triggering a tsunami warning.

A number of stars have since taken to their Twitter.com accounts to reach out to residents and encourage them to listen to evacuation alerts.

Aerosmith guitarist Joe Perry writes, "Thinking about my friends and our fans in Chile and other countries right now. I wish for your safety and no damage from after shocks," while actor/rocker Jared Leto posted a map of the tsunami evacuation warnings and encouraged his fans to look at it.

Oscar-winning actress Marlee Matlin writes, "Praying for Chile... For people of Chile and Peru... Be safe and follow evacuation instructions."

Horror director Eli Roth was in the capital Santiago when the earthquake struck and he assured fans he was not hurt in the disaster, writing, "All is fine in Santiago. Thank you everyone for asking. Earthquake was 8 hours away. Like a storm hitting Nyc (New York) when you're in L.A."