Leto Reached Out To De Havilland Over Emi Lawsuit 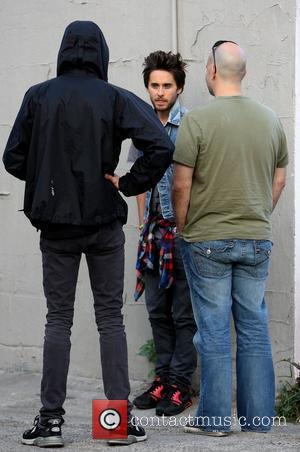 Picture: Jared Leto waits outside The Hive ahead of a small acoustic gig his band 30 Seconds To Mars are to perform there Los Angeles, California...

Jared Leto is planning a trip to visit veteran Hollywood star Olivia de Havilland in France - because she helped in his multi-million dollar lawsuit against record giant EMI.
The rocker and his group 30 Seconds To Mars were sued by the parent company of their label Virgin Music for $30 million (£20 million) in 2008 over claims they failed to produce an agreed number of albums.
The band refused to buckle to the demands of industry bosses and fought back, eventually settling the case earlier this year (09).
Leto has credited De Havilland with the victory, because the Gone With The Wind star set a legal precedent by fighting her contract with movie house Warner Bros. in the 1940s.
De Havilland won a lawsuit against the film power house which lead to service contracts in California being ruled invalid after seven years, and 30 Seconds To Mars' lawyers used the "De Havilland law" to resolve their case.
The actor-turned-musician contacted the 93 year old during the lawsuit and was delighted when she agreed to meet him and subsequently struck up a correspondence, offering advice about the case.
And Leto was so touched by De Havilland's help, he's planning a special trip to visit her at her home in Paris, France.
He says, "The California Appeals Court ruled that no service contract in California is valid after seven years, and it became known as the 'De Havilland law' after she used it to get out of her contract with Warner Bros. We used the same statute to resolve our lawsuit... I'm going to visit her in Paris to thank her."