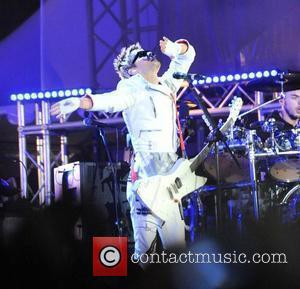 Jared Leto is furious about the negative reaction to 30 Seconds to Mars' latest music video, insisting TV bosses promote a "double standard" over sexual images onscreen.
The band's promo for new single Hurricane has been banned from U.S. TV after censors deemed it too explicit to broadcast because of raunchy bondage shots and violent fight scenes.
Leto admits he knew the footage would cause controversy, but he never expected the video to be so widely shunned.
He tells EW.com, "We always knew there would be some images that would have a tough time getting through. But we didn't expect this kind of pushback that we're getting now. I had always planned on having an explicit version and then a version that was not so explicit. The version that we were trying to get on broadcast is not the explicit version, and that's still having a really difficult time.
"I'm not interested in provocation for provocation's sake. I just think it's interesting that when you turn on the news or whatever else catches your interest, how much violence and negativity is available out there. As soon as it comes time for sexuality, it's a big shock that people are sexual beings. It's an interesting double standard to me."
The singer is now considering re-editing the clip to help get it on TV and he's asking collaborator Kanye West, who features in the song, for advice.
He adds, "I have talked to him about it. I've sent him some images and some clips. We're still plotting and planning, so you never know."