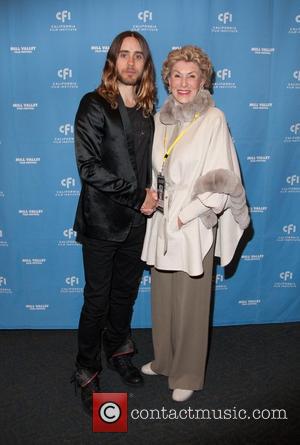 Picture: Jared Leto and Jennifer MacCready - Charismatic character actor and successful musician is presented with the MVFF Award in a feature conversation with Founder Mark...

Jared Leto has recruited Kanye West and Lindsay Lohan to appear in his new short film about life in Los Angeles.

Serving as a promo for Leto's band 30 Seconds To Mars, the film is titled City of Angels, which is also the name of the group's latest single.

West opens the film by listing everything he likes about Los Angeles, including pools, 1950s architectural homes, glamour and muscle cars.

He also talks about his bittersweet relationship with the city, since his fiancee, Kim Kardashian, gave birth to their daughter North in L.A., but it is also the place where his mother, Donda West, passed away from heart disease and plastic surgery complications in 2007.

In the teaser trailer, West says, "I remember liking it when I was first out there, but I also did lose my mother to that city. And that’s the weird thing because I feel like this city took my mother, but this city also gave me my child."

In addition to West and Lohan, other stars like Lohan, Olivia Wilde, James Franco, Juliette Lewis and Selena Gomez, add their thoughts on life in L.A.

Leto explains, "I made this short film so I could share my thoughts on this incredibly special place and talk to others about theirs. It's not so much about this particular city but more about the people who inhabit it. This is for the dreamers who know that sometimes the impossible is indeed possible."

Leto has directed the film, which debuts online on Tuesday (29Oct13), as Bartholomew Cubbins.