Jared Leto paid tribute to the estimated 10,000 victims of Typhoon Haiyan in the Philippines during the MTV EMAs. 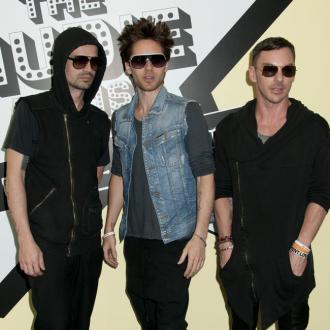 Jared Leto led a minute's silence at the MTV EMAs for the victims of Typhoon Haiyan in the Philippines.

The rocker - whose band 30 Seconds to Mars won the award for Best Alternative act - asked for the Ziggo Dome in Amsterdam to be quiet for 60 seconds in remembrance of the estimated 10,000 people killed by the devastating storm which swept across the islands on Friday (08.11.13).

Afterwards, he told BANG Showbiz: ''If we can be part of the solution rather than the problem then that's a wonderful thing and there's a terrible tragedy just affected a great number of people, many people have died, many people are displaced and they are in turmoil right now.

''So as we celebrate in one part of the world its completely legitimate and appropriate to send an acknowledgement their way. We're in a very fortunate situation right now and the tables can be turned very quickly.''

When asked if there should be a benefit for those affected, he added: ''I'm not in charge of anything, but if I had my way of course. You help if you can. Obviously we are fortunate to be here and not in some incredible giant storm that's gonna rip our houses and lives away from us. It's nice when people do that, it's solidarity.''

30 Seconds To Mars beat off stiff competition from the likes of Fall Out Boy, Arctic Monkeys, Paramore, and Franz Ferdinand to be crowned Best Alternative act.

Speaking about their big win, Jared added: ''It means a lot that people spent a great amount of time at their computers voting incessantly because they believe in us and what we do and share together, so it's a wonderful night and a nice celebration my friends, amen.''