Director David Ayer has shared the first official image of Leto as the DC villain.

Unless you’ve been living under an entertainment free rock you’ll know that Jared Leto is set to play The Joker in David Ayer’s upcoming Suicide Squad movie. Of course you’ll probably also know that Leto has been undergoing a pretty drastic transformation in recent months in order to become the DC villain. Well prepare to see things taken one step further as the first official image of Leto's Joker has been revealed. 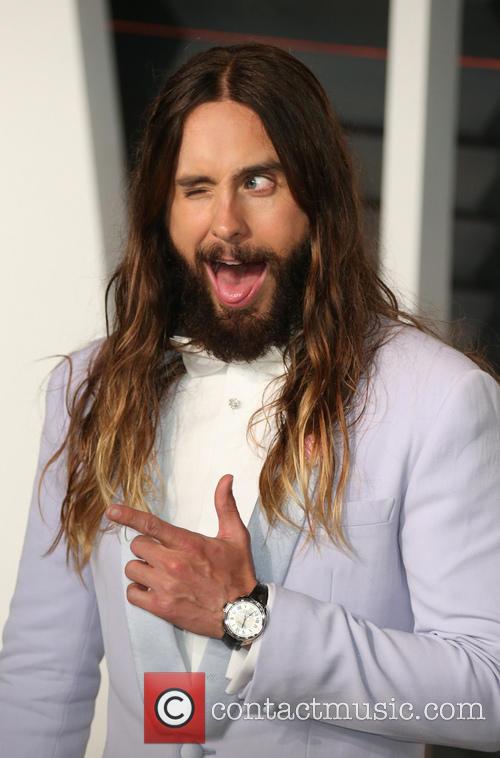 As he was, Jared before going full on Joker

Director David Ayer shared the first official image of Leto in full on Joker garb on Friday, on the 75th anniversary of the character’s first comic book appearance. With his hair cropped and dyed green, the 43 year old cut a pretty menacing figure in the pic, which also showed him sporting silver capped teeth and a variety of tattoos.

The Joker ink included the word ‘Ha’ written over and over again on the left side of his chest as well as his shoulder and arm, plus a drawing of a large grin on his right forearm. Leto also had the word ‘damaged’ written on his forehead.

More: Jared Leto Looses His Locks (And Beard) As He Prepares For 'Suicide Squad' Role [Photos]

Leto’s transformation into the iconic villain has been quite the talking point over the past few months, beginning in March when he cut of his trademark long, ombre-d locks. Days later Leto then debuted a new platinum blonde style, before he eventually went full on green last month for the role.

The actor is the first to take on the Joker role since the late Heath Ledger won a posthumous Oscar nomination for his portrayl in 2008’s The Dark Knight. The role has also been played by Jack Nicholson in 1989's Batman.

The Suicide Squad is set for release on August 5, 2016 and also stars Will Smith as Deadshot, Margot Robbie as Harley Quinn, Joel Kinnaman as Rick Flagg and Cara Delevingne as Enchantress. The film concerns a group of supervillians who are recruited by the government to carry out under-the-radar missions that the superheroes won’t touch.