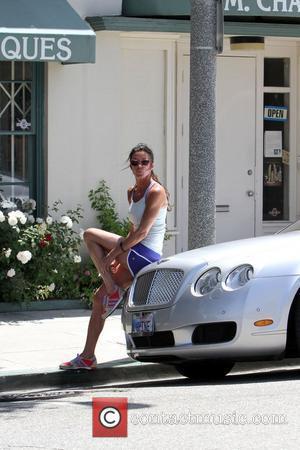 Picture: Janice Dickinson is in good spirits as she leaves a salon in Beverly Hills Los Angeles, California - 11.05.11

Janice Dickinson, the American supermodel turned television presenter, lost her two false teeth while dining at the exclusive 'Sant Ambroeus' restaurant in Southampton, according to the New York Post. Janice Dickinson says she misplaced the teeth after taking them out to enjoy her meal.
Explaining the embarrassing incident, DICkinson said, "I was so excited talking to my friend that I put my teeth in my napkin, and then I couldn't find them! Did they fall into the soup? These things are so expensive they could feed a small village". In an attempt to retrieve the missing teeth, the 56-year-old said she got down on all fours like "Lucille Ball on crack" and persuaded the restaurant staff to help her look. After much searching, DICkinson eventually found the teeth. The supermodel recently paid tribute to the plus-sized model Mia Amber Davis, who passed away suddenly following routine knee surgery last week. DICkinson told E! Online, "My heart goes out to her family. I am deeply disturbed by this news. I have been sobbing all afternoon. She was a kind, gentle girl. She was gentle and sweet and had a heart of absolute platinum".
Janice Dickinson recently appeared in the fourth season of 'Celebrity Rehab with Dr Drew', which premiered in December 2010.