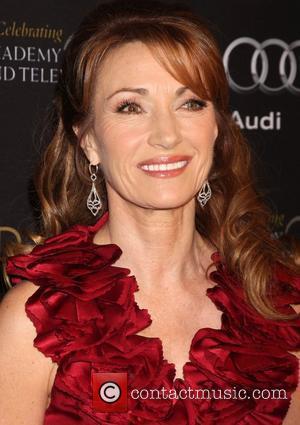 Former Bond girl Jane Seymour has become an Alzheimer's disease expert while researching a new movie about country legend Glen Campbell, who suffers from the memory loss condition.
The actress and her moviemaker husband James Keach are working on a documentary about the Rhinestone Cowboy singer as he hits the road for a final tour and she admits she has become fascinated by Alzheimer's.
She tells WENN, "It's just so amazing... Glen as we know has Alzheimer's and, in spite of this he's touring and he's got an amazing album called Ghosts on The Canvas... I believe that, with Alzheimer's, the last thing to go is the music, so the moment the music starts and he has his guitar, he's unbelievable.
"If you have the opportunity to see him perform live now is the time to do it and he is extraordinary.
"We're making a documentary about his journey through Alzheimer's and the family's journey and really the history of rock n' roll - because Glen was a huge part of that - and what we're discovering about Alzheimer's and how it relates to music is phenomenal... Sufferers might not know who you are but you play some music to them and then they remember. They'll start singing to it and remember and that is the last thing to go, which is pretty huge.
"I think that the fact that Glen is allowing us into his world and allowing us to see what's happening and we see the joy that he has when he performs... and to see him performing with his kids, who are in the band, is really something special. We also see what's happening with the science of Alzheimer's, so it's a wonderful documentary."