Jane Fonda And Lily Tomlin Have Expressed Their Displeasure At Bosses Behind Their New Comedy Grace And Frankie After Learning Their Supporting Co-stars Martin Sheen And Sam Waterston Are Earning The Same Amount Of Money As The Show's Leading Ladies. 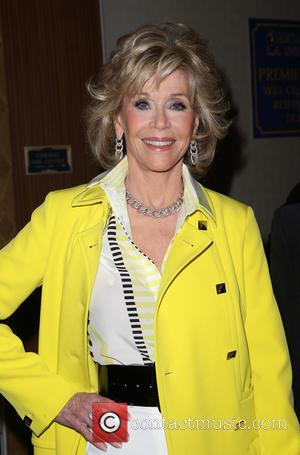 Picture: Jane Fonda - A variety of stars were snapped as they attended the Premiere Of Netflix's 'Grace And Frankie' which was held at Regal Cinemas...

The 9 to 5 actresses play the title roles in the new Netflix series, about two women who form an unlikely bond after their husbands, played by Sheen and Waterston, reveal they are gay and are planning to wed one another.

Fonda and Tomlin recently discovered the actors are banking just as much as the main stars for the programme, even though they have less screen time and the show is named after the female characters - and they are not happy.

Speaking at a press event before the series' premiere last week (08May15), Fonda said, "Lily found out Sam and Martin are getting the same salary that we are. That doesn't make us happy."

Chiming in, Tomlin added, "No. The show is not Sol and Robert (husbands' characters) - it's Grace and Frankie."

Gender pay disparity has become a hot-button issue in Hollywood ever since emails, leaked as part of the Sony Pictures hacking scandal, revealed that both Jennifer Lawrence and Amy Adams received lower salaries for their work on American Hustle than colleagues including Bradley Cooper and Christian Bale.

Charlize Theron recently admitted the revelation prompted her to renegotiate her fee for the upcoming Snow White and the Huntsman prequel to bring her salary in line with that of her male co-star Chris Hemsworth.