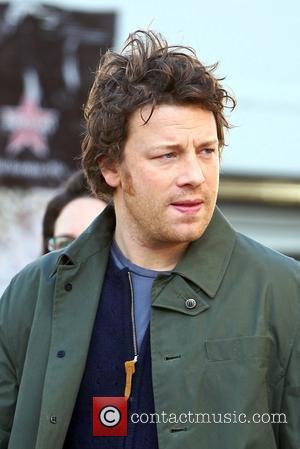 Picture: Jamie Oliver out and about in Hampstead London, England - 27.01.12

Celebrity chef Jamie Oliver has uncovered 1 million pounds worth of jewellery, a gun, and perhaps most interestingly for music fans - some original JOY DIVISION master tapes, in the basement of his new restaurant. The haul was discovered at Jamie's new restaurant in Manchester, which used to be a Hsbc bank.
According to the UK's Sun newspaper, gold master tapes from Joy Division and New Order recording sessions were found clumsily stashed away, while a firearm and numerous pieces of expensive jewellery were also found. A spokesman said, "If I knew exactly what was in those boxes I would not be able to comment on that for reasons of confidentiality.We cannot reveal the precise contents, but these are safe deposit boxes - there are bound to be valuables in there.If we did find anything illegal in there we would be required to notify police". The Grade II listed building on King Street, was designed by Edwin Lutyens in 1982. A spokesman for Hsbc, who previously had ownership of the property, explained why the company didn't take the safety deposit boxes with them, saying "We were moving to a new site and wanted to transfer the safe deposit boxes.However [because the building is a Grade II listed building] National Heritage said we were unable to take the actual boxes with us, because they were part of the structure".
Members of New Order and Joy Division are yet to comment on what the master tapes could feature. Jamie's restaurant opens in Manchester next week, next to the eatery owned by Manchester United footballer RIO FERDINAND.