Quote: "I vajazzle more for myself, so I have that secret sparkle that no one knows about." Actress Jennifer Love Hewitt is still decorating her genitals with crystals even though she's no longer in a relationship after splitting from Jamie Kennedy.

Quote: "I know everybody thinks it's a break-up haircut - but it's not. My favourite headline so far was 'She Cut That Man Right Out of Her Hair.' But no - it was really just for me." Jennifer Love Hewitt is adamant she didn't chop off her long locks as a reaction to her recent split from boyfriend Jamie Kennedy.

Quote: "It's what life handed me, and I'm OK with it. I know wholeheartedly that I'm a really good partner. I think I'm a really good girlfriend, and I think that I could be a really good wife. I know that I love being able to give my love out to someone. I know there is somebody great out there for me." Newly-single Jennifer Love Hewitt keeps a positive outlook on her love life following her split from GHOST WHISPERER co-star Jamie Kennedy.

Tweet: "Kate Winslet, Sandra Bullock and I are all going to have tea later and talk bout relationships (sic)." Funnyman Jamie Kennedy makes light of his recent split from Jennifer Love Hewitt.

Quote: "I met a lot of people who were like, 'Are you not acting anymore?' I was like, 'Oh no, I am, just not right now. I'm just selling T-shirts.'" Jennifer Love Hewitt on taking a summer job as boyfriend Jamie Kennedy's 'merchandise girl' on his recent comedy tour.

Quote: "She's not just a co-worker, she's the boss! I'm sleeping with the boss, so she's essentially sexually harassing me! I'm not gonna be fired, but if I do things to p**s her off at night, then the next day my character gets written out!" Funnyman Jamie Kennedy on dating his GHOST WHISPERER co-star Jennifer Love Hewitt.

Quote: "I was excited to be her plus-one. I am Jennifer Love-Hewitt's plus-one." Jamie Kennedy on going public with his actress girlfriend at the Academy of Country Music Awards in Las Vegas on Sunday (05Apr09).

Quote: "I've been trying to call Travis because he was on my show BLOWIN' UP and I've known him for a long time. I just hope to God, and I pray, that they're OK and they get through it... My heart goes out to the four victims' family, for sure, and I do hope that DJ AM and Travis do pull through." Comedian Jamie Kennedy's thoughts are with his pal Travis Barker, who was involved in a devastating plane crash in South Carolina at the weekend (19Sep08), which left four people dead. 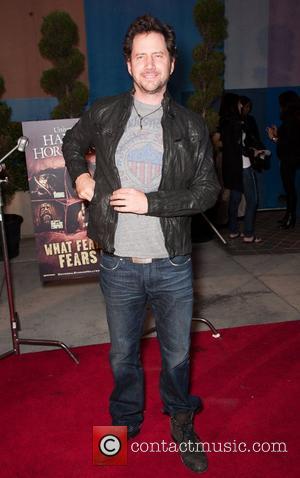