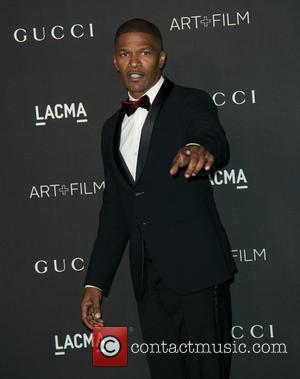 Picture: Jamie Foxx - A variety of celebrities were photographed as they arrived at the 2014 LACMA Art+Film Gala which honored conceptual artist Barbara Kruger and...

Jamie Foxx has praised R&B star Chris Brown for showing kindness to the actor's younger sister, who has Down syndrome.

The Django Unchained star's sibling, DeOndra Dixon, is a huge fan of the Kiss Kiss hitmaker, and Foxx will never forget the generosity Brown showed when the actor asked for a personal favour.

During an interview with Queen Latifah on her U.S. talk show on Monday (17Nov14), Foxx was speaking about his beloved sister, but made it a point to remind viewers that Brown, who has had his fair share of publicised legal run-ins, is not a reflection of his past mistakes.

He explained, "My sister has been able to be in my world and meet all these people, but I want to give a special shout out to somebody - there's a young man by the name of Chris Brown who always gets a lot of crazy things said (about him) he does a few things here and there that we might take out of context.

"But when I called Chris Brown about my sister, because she has this huge crush on him, he dropped everything. No cameras around. He comes to dance with her (and) hangs out with her."