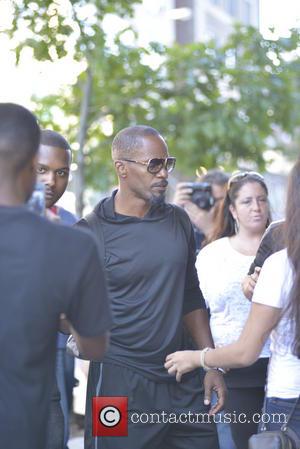 Jamie Foxx paid tribute to singer Harry Belafonte and Motown boss Berry Gordy during an emotional speech to mark the 50th anniversary of Martin Luther King's iconic 'I have a dream' civil rights address in Washington, D.C. on Wednesday (28Aug13).

The Oscar winner was among several famous faces who joined African-American leaders and politicians at the National Mall for the celebrations, but his speech was one of the day's most impressive as he urged the youth of today to respect their elders, like he respects the elders who marched with King.

Foxx recalled a touching recent meeting with Belafonte when the veteran entertainer served up a life lesson for the Ray star and his teenage daughter.

The actor/singer told the crowds gathered for the day of remembrance, "I said (to my daughter), 'Listen, if you want to get inspired, come listen to this man speak.' When I sat with Mr. Belafonte, he asked my daughter, 'How old are you?' and my daughter said, '19'. And I said, 'Mr. Belafonte, what were you doing at 19?' and he said, "I was coming home from World War Two and when I got back to America I wasn't allowed to vote... I realised I had more work to do, so myself, Al (Sharpton), Jesse (Jackson) and Martin (Luther King), we marched.

"I said, 'Wait a minute, man, you sound like you're naming a boy band group. What do you mean...? And he looked at my daughter and said, 'Martin Luther King, have you heard of him?' And we sat there and we cried."

Foxx added, "What we need to do now is the young folks (need to) pick it up now, so that when we're 87 years old, talking to the other young folks, we can say it was me, Will Smith, Jay Z, Kanye, Alicia Keys, Kerry Washington (who made a difference)."

Foxx also noted that Belafonte also bailed Martin Luther King out of jail "so that he could march" and paid for his widow Coretta Scott King's bills "as long as she was on this planet".

The Ray star concluded his stirring speech by paying tribute to another African-American icon, Berry Gordy, explaining, "We have to salute Mr. Berry Gordy because Mr. Berry Gordy put Dr. King's speech on an album and put it out on Motown Records and after he did that, he turned around and gave those reels and those tapes back to the King family."