Jamie Foxx on Spike Lee: "Where's Spike Lee Coming From...? He doesn't like anybody" 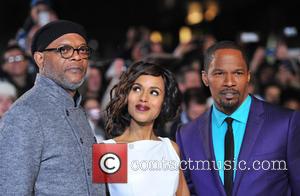 Spike Lee tweeted his disdain for Quentin Tarantino's Django Unchained recently, saying: "American Slavery Was Not A Sergio Leone Spaghetti Western. It Was A Holocaust. My Ancestors Are Slaves Stolen From Africa. I Will Honor Them."

However, now Jamie Foxx who stars as the titular character Django in the movie, has given his verdict on Lee, the Huffington Post reports. "The question for me," he says, is "where's Spike Lee coming from?"

Foxx continues: "He didn't like Whoopi Goldberg, he doesn't like Tyler Perry, he doesn't like anybody, I think he's sort of run his course. I mean, I respect Spike, he's a fantastic director. But he gets a little shady when he's taking shots at his colleagues without looking at the work. To me, that's irresponsible."

Foxx seems to feel that Lee's aversion to Tarantino is that he is a white man telling a black story, which is potentially very problematic: "But you got to look at the individual cases," he explains. "When Pat Boone covered Little Richard, you think, 'Huh?', he's got no affinity for it. 'Good Golly Miss Molly'? I don't think so. But you can't tell me that Eminem ain't hot 'cos he's white or that Elvis Presley isn't a bad motherfucker, or that Quentin Tarantino can't do whatever he likes, 'cos damn straight he can."