Jamie Foxx Has Defended His Django Unchained Director Quentin Tarantino Over His Controversial Comments About Policing. 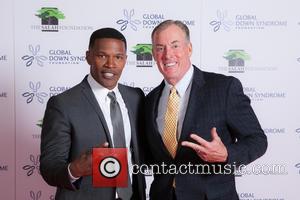 Picture: Jamie Foxx , John C McGinley - The Global Down Syndrome Foundation ("Global") raised a record-breaking $2 Million at the 7th Annual Be Beautiful Be...

The moviemaker has come under fire from police officials across the U.S. after he made an appearance at an anti-brutality rally in New York City and appeared to brand cops "murderers" over the alleged mistreatment of suspects.

His comments infuriated a number of top police officials both in the Big Apple and across the U.S., and many have called for a mass boycott of Quentin's work.

However, his onscreen collaborator Jamie appeared to come out in defence of his friend during the Hollywood Film Awards in Los Angeles on Sunday (01Nov15).

Jamie took to the stage to present the Hollywood Ensemble prize to Quentin's The Hateful Eight cast, and he told the audience the director should "Keep telling the truth, keep speaking the truth and don't worry about none of the haters."

The head of the Patrolmen's Benevolent Association (PBA) previously urged officers to boycott the star's films to protest against his comments about policing in America, and he has been backed by the Los Angeles' Police Protective League and Philadelphia's police union.

John MCNesby, president of the Philadelphia, Pennsylvania institution, said, "Mr. Tarantino has made a good living through his films, projecting into society at large violence and respect for criminals; he it turns out also hates cops."

Quentin's father, Tony Tarantino, has also reportedly criticised his son for the remarks.

In a statement issued from the PBA, Tony is quoted as saying, "I love my son and have great respect for him as an artist, but he is dead wrong in calling police officers, particularly in New York where I grew up, murderers."