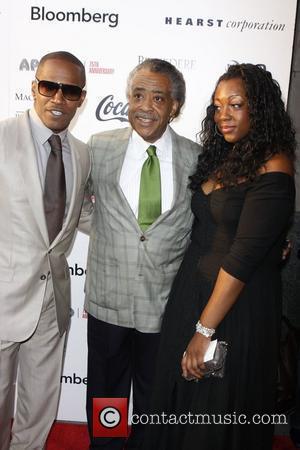 Hollywood actor Jamie Foxx has made another celebrity enemy - he has upset Rihanna by embarrassing her in front of revellers at a Las Vegas nightclub.
The Ray actor was cracking jokes for fellow party-goers at Sin City's Tao hotspot when he spotted the R&B star and repeatedly asked her to join him on stage and take the mic.
She refused, and Foxx prompted the DJ to blast out her hit Umbrella over the speakers, according to New York Post gossip column PageSix.
Foxx saw the singer preparing to depart and ordered her to stay - reportedly leaving her "fuming".
A source tells the tabloid, "Jamie took over the microphone and started doing a show. Halfway through, he asked Rihanna to join him onstage. Rihanna declined, but Foxx continued to badger her.”
When the DJ began to play Umbrella, the source adds: "That was the last straw. She got up to leave, and Jamie told the DJ to stop the record. (He shouted) 'You can’t go while your song is playing. Relax.'
"Rihanna stayed and pretended to enjoy herself, but it was so obvious she was fuming. As soon as the song was over, she got the hell out of there."
Foxx sparked outrage in April (09) during a U.S. radio interview when he urged 16-year-old Hannah Montana star Miley Cyrus to take heroin and make a sex tape.