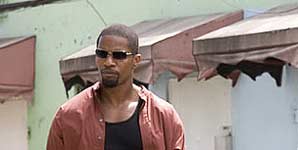 Question: How did it feel to play an undercover agent?

Jamie Foxx: We did this undercover thing where we're supposed to be buying drugs from this guy, and somebody comes up on the side of the car and points a gun to the back of my head and says that's how easy it could go wrong. So it's a little bone chilling, you know, you think wow, you're in this world and gun play is so prevalent and so easy to happen. So it really gives you a sense, it was a plastic gun, but it really gives you a sense that if that were to happen, that you're head would be blown off. So it's a dangerous game when you play an undercover agent.

Question: How did Phillip Michael Thomas' portrayal of Tubbs inspire your interpretation of Tubbs?

Jamie Foxx: The thing that I did do from Phillip Michael Thomas is the swagger. I was trying to, I don't know if I even got close to it but, he has such swagger. It was one of the first episodes of Miami Vice when the guys walk up to the car and he pulls out a shotgun, 'You guys wanna get outta here?' and to see the coldness, that seriousness, of when it came time to get down, he got down. And so that was the one thing I tried to bring, and the style. I wanted Tubbs to have style in the movie, I wanted him to look fly.

Question: Did you ever watch the television show Miami Vice?

Jamie Foxx: Oh yeah, it was just something poeple had never seen before. You never seen in your face action like that, you never seen boat chases, you never seen car crashes every week. I mean this was something else; it was like what is coming into our living room. There was just on the cutting edge, the women were fly, the actors and the guest stars, they had guest stars, the music sound track. So, it was hot, you know, it was where everybody wanted to be. And so now, to see someone, re-birth that, I think that's gonna be hot.

Jamie Foxx: That's the serious dynamic in this film, is me being with a woman that I really love, almost afraid to say, but to see her snatched from me, you know, that fuels my revenge, fuels the reason that I make sure I get that guy.

Question: What are your feelings on making the Miami Vice film?

Jamie Foxx: I mean it's definitely departure from the TV show; it's not the same thing. Michael Mann is trying to create magic again, make lightning strike twice. Obviously with the success of Miami Vice on television, there's a heavy burden to make Miami Vice the movie, the thing, the now, the new. So, you know, we all got our heads together in the trenches and trying to make it something completely special and different.

Question: What do you think about Michael's Mann's use of the different, interesting locations you filmed at?