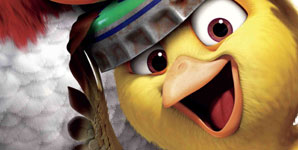 He's an Oscar winner and a Grammy winner, and now the 43-year-old Jamie Foxx gets animated as Nico, a tiny yellow canary that knows how to think big. Nico and his pal Pedro supply the wild side to Blu's new life in Rio, and help set about uncaging him - both physically and mentally. Foxx's friends have long told him he should visit Rio, and here he explains how the experience has been.

How did you get involved in Rio?

I was pitching an animated movie to Fox called Welcome to the Jungle, and they bought that and started working on it when this came about. They told me everybody that was in it, including will.i.am and that we would be paired up, and that there would be big musical numbers. Plus I'm a huge fan of the Ice Age movies - I've got daughters, so they checked that out - and the fact that it was Rio in Brazil was a plus.

Why was that important?

Rio has always been one of those places where people are always asking me, 'Oh, you been to Rio yet, man? You have not lived until you've gone to Rio to see how beautiful the woman are.' So, there are a couple of web sites you can look at and see, wow, these women are fantastic. A few days before I got here the girls that I know were like, 'So, you're going to Rio, huh, you're probably not going to come back because you're gonna get married.' That's been the whole experience and it's been fantastic.

Now you're here, has it matched your expectations?

Yeah, and I've only seen a little of it, but the people are nice and genuine, and I actually met a person in Miami who said, 'If you ever get to Brazil, I will host you,' and this was about a year or two ago. Then I came, went over to his house with his wife, and it was beautiful just watching the ocean - just amazing. So I can understand why will.i.am wants to move here.

Do you think the movie has been faithful to the city?

It's different in the fact that when you see the real city there's a certain quality to it, but looking at just the poster, that looks incredible, like you really want to go there and really want to go see this film. That's a tough thing to do, to be able to capture something, rated G where kids have to go, and I just think it's right on.

Do you see a growing interest in Brazil in the US?

Yes, and I'll tell you why - everything's coming here. I was talking to the locals, and they were like, 'Brazil is on the upswing, as far as the economy is concerned, as far as safety is concerned.' It is definitely something that people talk about a whole lot.

Why do you think that is?

Our economy is so strained and strange - it's like we're so used to things going well, so when things go bad, we're like, 'What? What does that mean.' It means we have to stop doing what we're doing, because what we're doing is destroying our world. I'm sure President Obama has come here trying to get tips and he will definitely bring those things back to the United States and try to implement them.

What can you tell us about your character in the movie, Nico?

He's this yellow canary who lives in Rio and who sings about love, and he's just a fun loving character. Pedro, is his homey - played by will.i.am - all they do is fly around spreading love and music to everybody. When they see Blu trapped in this cage coming from America they try and free him; they try and free his soul. They want to free him not to just fly in the physical way, but fly in the spiritual world.

And how'd you enjoy playing a bird?

I had to get my bird together, and that took hours and long days. I played a lot of the theme song from Rocky to get that impersonation out. And once I got that we were off to the races.

Was it tough getting the voice tracks done?

Yeah, that was tough for me at first. I was doing facial expressions, hand movements and things like that, but that obviously wasn't going to help the situation. But they let me hear Will's part to sort of get me up to speed on how it should sound, but at first it felt like being a baby.... you feel like, 'Wow man, I hope they still want me to do the flick, because I'm not really nailing it.' But then you find it, and after that there was the music part, and the music was fantastic. I took my little daughter to see the cuts they had of the movie, and it's crazy. When it starts out and the jungle comes alive - man, that's amazing.

How'd the experience contrast with working on a live action movie?

Well for me, I was just trying to act. I'm doing all these things and he's like, 'You're not actually on film.' But then to look at it...we were seeing some of it for the first time and that blows you away. A lot of times you go to animated films and you think, 'It's going to be dumbed down for the kids, and I'm just taking them... chained to my kid.' But this right here I was like, 'This is really wow.' It's got the wow factor. I just had a great time.

How was it getting the chance to collaborate musically with will.i.am?

We performed at Wango Tango and that's when my daughter said that I had made it in music. will.i.am is an incredible talent and to be in the studio with him and watch him work is amazing. Normally in the studio there's an engineer there and a producer and all these different entities: he envelops all of those. He has the mic there, he's also doing the engineering, and that's off the chart - it was a fantastic experience to watch it. Plus it was amazing to have him lead me in the right direction. I always tell people my life should be an E ticket ride at Disneyland because its so much fun.

Do you think the soundtrack captures the flavor of the city's music?

You know, I was just along for the ride - it seemed like the music was all authentic to me. Listening to will.i.am, and he's at the top of his game, and then Carlinhos Brown... they know what it is, so my job was easy.

Blu and Jewel face many challenges in the film - what one piece of advice would you give a kid to not give up in the face of adversity?

Me and my boy were calculating the years a couple of days ago.

I'm 43 so we calculated, 'Hey, man, you know like in 35, 40 years we won't be here.' It was like, 'We might as well get it all in as far as living and enjoy your life.' We're living in the blink of an eye, so whatever it is you want to do, you go out and do it. I remember meeting President Obama and looking at him like, 'Damn, this dude is really our President.' It tripped me out, like, 'You really went out and did it!'. You know how you have the guards up when you're bowling?

Just take it off. Bowl that strike, or at least try.

Jewel in the movie plays extraordinarily hard to get. In your experience, is that the way to get the guy?

I love dating in L.A. because I think girls have to play a little harder to get there because we come with so much bravado and so much stuff. I love how I'll date a girl and they'll always put 'little' in front of everything I do. 'Hi, Jamie. I know who you are. I see you doing your little movies and your little things, and win your little Grammys and win your little Oscar.' Huh? There's nothing little about it, but they do that because it's tough terrain out here so they keep you at bay. I dig the person that's not quite so easy because the easy thing sort of scares me. You'll meet somebody and all of a sudden you're dating and you're on a cruise.

What's next for Jamie Foxx?

I have a new company called No Brainer, and we've sold about five TV shows in the last nine months, and we have a couple of movies that we're going to do. The way my company runs, is that the ideas we create come from real things. We'll have the first projects out real soon...