Jamie Dornan proposed to a 'Fifty Shades of Grey' fan on behalf of her boyfriend after he phoned into radio show Capital Breakfast with Dave Berry and LISA SNOWDON. 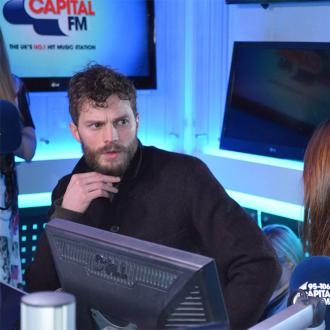 Jamie Dornan proposed to a fan on her boyfriend's behalf.

Speaking to Jamie on the radio, Tom said: ''My girlfriend is a massive fan of 'Fifty Shades of Grey'. She's read all the books and we're looking forward to seeing the film on Saturday (14.02.15) and it's coming up to our three-year anniversary this weekend and I was thinking about asking her to marry me...

''It's a once in a lifetime opportunity to get the actor who plays Christian Grey to pop the question for me, if you wouldn't mind?''

Jamie agreed to Tom's request and he was put through to an excited Emily.

He told her to ''have a seat'', before continuing with the proposal.

He said: ''I've got something to ask you on Tom's behalf. Tom would like to know if you would be his wife?''

Emily was excited by the question and even forgot to give an answer.

When prompted, she shouted: ''Yes!', and Jamie offered his well wishes to the happy couple.

He quipped: ''Congratulations. I hope to get invited to the wedding.''