'Billy Elliot' actor Jamie Bell has revealed he wishes he had challenged 'The Eagle' co-star to a dance-off on set. 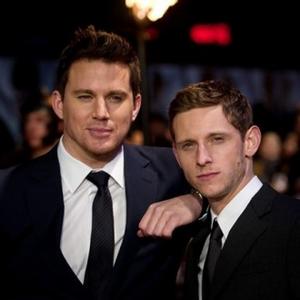 Jamie Bell wanted a dance off with Channing Tatum on the set of their new movie.

The pair star together in new action movie 'The Eagle', but with both having shown off their footwork in their previous films - Jamie in ballet movie 'Billy Elliot' and his co-star in 'Step Up' - the British actor wanted to put their skills to the test, though he thinks they would both be worthy winners.

Jamie said: "I wish there was a dance off on set. We both have different styles of dance, he's much more of a contemporary dancer and I come from a tap dancing background. If it was a battle I think we should both win medals, because we do come from different arenas."

Jamie is so keen to show off his dance moves again, he even wanted a special sequence written into 'The Eagle'.

While Jamie was keen to test out their abilities, Channing wasn't up to the challenge.

When urged to participate in a dance off by BBC Radio 1 DJ Fearne Cotton, Channing said: "I just had hip surgery very recently so it's not a good idea."

While Channing's hip injury was not sustained on set, he revealed he still doesn't like to hear the song 'Sex on Fire' by Kings Of Leon because it was the first song he heard after he suffered an agonising injury to his manhood when a set assistant poured boiling water down his wet suit during filming.

He explained: "'Sex on Fire' is the song that was playing as I was rushed to the hospital after I burned a very personal piece of my anatomy.

"It's definitely all healed now though, I'm back on top!"