'Billy Elliot' star Jamie Bell has described his wife Evan Rachel Wood as his ''warrior'' woman following the birth of their first child together, 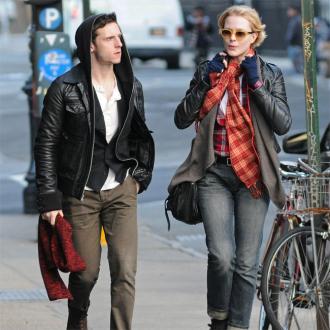 Jamie Bell has praised his wife Evan Rachel Wood for being a ''warrior'' woman following the birth of their first child on Monday (29.07.13).

The 'Billy Elliot' star took to Twitter to praise his actress spouse for her bravery during the labour and the safe delivery of their baby son at home.

Jamie tweeted: ''Wow! What a day. Evan you are my warrior! You never cease to amaze. Thank you for birthing our son so naturally & peacefully. You did it!''

The 'True Blood' actress replied to his tweet thanking her husband for his support while she was in labour, and was lost for words as she tried to express the love and joy she was feeling.

She said: ''And you are mine :) thank you for being there and helping me through it. I love you both more than words can say. (sic)''

Evan, 25, also thanked TV presenter Ricki Lake on Twitter for inspiring her to have a home birth.

She tweeted: ''I have to say thank you @RickiLake for your inspiring documentary ''the business of being born'' I never knew I had a choice when it came to labor. It taught me so much & aided my decision in having a natural home birth which my son & I are now forever grateful for. (sic)''

The couple have been moved by the volume of heartfelt messages they have been sent by fans.

Jamie, 27, added: ''Amazing outpouring of love & congratulations from you Twitter folk. Thanks so much.''

Evan and Jamie first met in 2005 on the set of Green Day's video for 'Wake Me Up When September Ends' and even got tattoos of each other's initial before splitting in 2006.

Evan was engaged to Marilyn Manson for a short time before she and Jamie reunited in 2011 and married in October 2012.