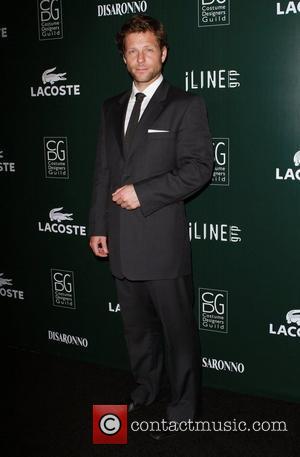 Battlestar Galactica star Jamie Bamber has stripped off for a new People for the Ethical Treatment of Animals (Peta) anti-fur campaign.
The actor has posed topless for the Bare Skin, Not Bearskin ad, which urges officials at Britain's Ministry of Defence to stop slaughtering Canadian black bears to make the Queen's Guards' hats.
He says, "The obvious alternative is to make caps out of faux fur. You know, use synthetic materials to avoid killing a beautiful animal. They're not to keep warm. It's not particularly freezing outside Buckingham Palace. You could wear something else. And you could certainly wear faux fur."
Bamber joins animal-friendly stars including Pamela Anderson, Joss Stone and Ricky Gervais who have spoken out against the use of bear hides.