James Morrison is about to take the world by storm and with this musical heat wave we're having, his cooling presence will remind us all what music is really about. His blend of soothing guitar work, poignant soulful voice and heartfelt lyrics have seen him reach number 5 in the charts this week with his single 'You give me something'. 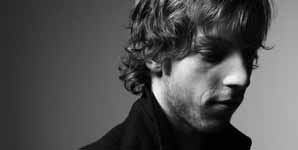 Contactmusic got the chance for a quick interview with James who is currently on the road for his sold out UK tour.
Contactmusic: Firstly thanks for talking to us and congratulations on the top 5.
James: Yeah man, it's well good!

CM: How was that?
James: It's mad! I mean obviously I wanted it to do well but I was quite surprised to get in the top 10 let alone top 5.

CM: So where were you when you found out?
James: I was at home and my manager phoned me and he said "You've got number 5 today" and I was like "No way!"

CM: [Laughs] Yeah.
James: I'm really pleased man, because I never really intended to be a full on chart kind of a person. I wanted the songs to be good and obviously you want them to get played on radio but I'm well pleased.

CM: So for those out there who might not have heard of you and in a kind of pseudo-Dave Gorman fashion: We're gonna play a little game.
James: Errrm ok.

CM: There are no prizes or anything like that involved
James: [Laughs] Ok

James: Errm James Morrison the singer songwriter I suppose, I don't know. Well it's my middle name and I didn't want to use my last name because it's not very good.

CM: .and I can really hear similarities in your voices and that's really exciting. So did take you a while to find your voice or was it something which came quite naturally?
James: Well the tone, I always had a bit of a husky tone to my voice but it took me a good 5 years to learn other people's songs and find my own. It was only like when I got to about 16 that I thought yeah I've got my own voice now. But you're learning all the time, so I'm still finding it to be honest.

CM: So did that come out of a transition from playing other people's songs to your own songs?
James: Yeah exactly. Trying to find one voice that I could sing, I mean it was there but I didn't know it. Not until I tapped into the soul stuff and Van Morrison stuff that I started to find it. Because when you're a kid you listen to tunes and you copy them.
So I used to listen to Micheal Jackson and I used to copy the way he sang, because that was how he was singing it. It's like when people sing Oasis or whatever they sing like Liam Gallagher. But I suppose after learning so many songs and stuff and different types of songs you kinda learn how to sing it in your own way.

CM: So on the lyrical side of things: Do you find writing lyrics and performing them cathartic? Like expressing your vocally is almost like musical therapy?
James: Yeah definitely. I think the fact that you can be free on stage is a good thing. It's like you're freeing yourself up from any bullshit. You're just going on stage and performing how you feel and it's such a freeing experience.
But obviously I love playing music. I mean if you're frustrated and you've been having a bad day and you wanna just belt it out, you belt it out and you feel so much better, it's like having a work out you know.

CM: So how hard or how easy do you find it being so open about your feelings in such a public way?
James: I mean I've been open about it but people are gonna read different things into lyrics anyway. I've tried to be honest about my lyrics but it's not to the point where I'm giving everything away. I mean I don't feel like I've opened up my chest and laid my heart out on the table, but I have wrote them in a way that's honest and hopefully people will pick up on that. But I don't find it too difficult at the moment.

CM: I mean the last few months for you have been crazy. I'm looking at my notes and you've; done your residency at London's Eve club, Supported Corrine Bailey Rae, Done all your TV appearances - Jools Holland, Top of the Pops and stuff like that and now you've just embarked on a completely sold out UK tour. How does that feel? Is everything sinking in yet?
James: You don't have time to let things sink in as there is always something else coming up. By the time you get used to it you're moving on to something else. Like when I did Top of the Pops I had to go and do GMTV and I was like "Bloody Hell Woah!" I mean that kind stuff does have a bit of a wow factor but the main things that gets you is when people come to see you in concert and they know your words. That's the thing that gets me more; it's not being on TV but having people know your songs and them knowing who you are and you don't know them, that's the freaky thing.

CM: Yeah I can imagine.
James: Yeah but it's all good, it's all positive and I'm really pleased with the way everything is going and I'm lucky that people do want to come and see my concerts and it's all taken off so well.

CM: So how have the first few shows gone?
James: Great man! We've had some really good shows at Bush hall last night and the night before, they were amazing! Probably one of the best ones I've done.

CM: Really? Great!
James: Yeah definitely the atmosphere was SO good. Everyone was into it and everyone was in a good mood and it was boiling hot as well. But people were really supportive singing a long and really energetic, it was great.

CM: The bulk of your fan bases are of the female variety and I read that you're trying to become more of mans man in terms of fans.
James: It's not that, I never intended in being some kind of romancing singer-songwriter, I never intended on it being like that and I didn't want people to perceive me like that. But I'm a normal guy at the end of the day; I'm not a bloke's bloke or anything like that. I'm just a fucking guy and I want everyone to like the music. It's not just about getting fit girls to come to the concerts. But that's all well and good, do you know what I mean. But you want everyone to like it not just the specific market of 'young girls'. I wanted it to be for older people for students whatever.

CM: Yeah exactly.
James: I mean it's getting there. But guys are a bit weird about going to see guys, young guys anyway in concert. Maybe if I was older I might get people coming.

CM: Hopefully. You're getting so much airplay at the moment in this country and I've been looking around and places all across Europe, places like Denmark and further a field as far as Indonesia and Korea are playing your record.
The eyes of the music world are really looming large for you at the moment. Is that something which burns through your soul or is just warm and comforting?
James: It's not warm and comforting. [Laughs] It's a lot of pressure to know that everyone is looking at you and you're always gonna have your critics. But that's the thing: Before all this kicked off it was just the music but when you put in the limelight everyone is gonna be critical about you.
I did interviews for a couple of magazines and they twisted a little bit what I said about how I felt about my album. But that's the thing, everyone's gonna have their own opinion. You can give you opinion but people will always have their own opinion on your opinion. So it's a bit more intense, but I'm trying to ignore it. I just do what I do and if people don't like it they don't like it. I'm not gonna force for the issue, do you know what I mean?

CM: Yeah definitely.
James: Music's music and you should just let it be what it is and not try and think about it too much. I had a guy come to the gig last night Lucian Grange he's like the head of the music business, he owns Universal and stuff. And at first I was like "Woah" this guy is coming to see my gig and I was a bit nervous. But then I thought you know what he's just a normal guy. Everyone's the same fuck it. I'll just do what I do and hope it works. I know I'm doing my best and that's good enough.

CM: That's a perfect way to look at it. That's exactly what I do myself when I'm interviewing someone or whatever. It's obviously on a smaller scale but we're all human beings at the end of the day.
James: Yeah man - fuck it, we're all the same I don't give a shit if you're a bin man or you're a musician or whatever it don't matter. We're all the same.

CM: So we're running out of time so I though I'd ask you a quick question which is: What is your favourite breakfast cereal?
James: Well it used to be Coco pops when I was a little lad, because we could never afford them and that. But I bought a box the other day purely because I hadn't had any in ages and they tasted like shit so.

CM: [Laughs]
James: Err so I'd say. I dunno. I like fruit and that, yoghurt and oat cereal and all that fresh and healthy stuff.

CM: Sounds good, I just thought I'd throw it in at the end
CM: That's it James.
James: Cool nice one.

CM: You won't be getting any twisting of words from me it's how it is. So now I'm gonna say good luck, I mean don't really need to say good luck but you know.
James: Thanks a lot mate.

CM: But I hope it goes well for the rest of the year and I'll be watching out for you.
James: Nice one thanks a lot.

James Morrison's album 'Undiscovered' is out on 31st of July.

James Morrison would never do anything 'good' for his voice