Posted in Press Releases on 07 December 2012 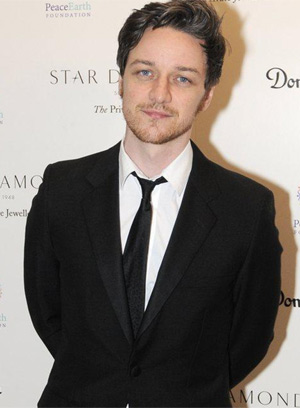 BAFTA winning and Golden Globe nominated actor James McAvoy (The Last King of Scotland, Atonement, X-Men) will star in Shakespeare's Macbeth, Jamie Lloyd's (Donmar's Passion, Broadway's Cyrano de Bergerac, the Old Vic's The Duchess of Malfi, Royal Court's The Pride) inaugural production in a season of work for Trafalgar Transformed. Macbeth will be staged at Trafalgar Studios from 9 February until 27 April, with press night on 19 February 2013. Design for Jamie Lloyd's season is by Soutra Gilmour, who won the 2012 Evening Standard Award for Best Design for Inadmissible Evidence at the Donmar Warehouse, directed by Lloyd, and Antigone at the National Theatre. Further casting will be announced shortly.

Jamie Lloyd's production will see Shakespeare's darkest tale play out in a dystopian Scotland brutalised by war. Under a toxic fog, Macbeth begins his tormented struggle for power fuelled by ambition and paranoia.

All tickets will be £15 on Mondays. Half of these will be made available through a special outreach scheme led by Ambassador Theatre Group Creative Learning Department, targeted towards schools and first-time theatregoers. The other half will be released monthly to the public on the first day of each month, starting on 1 February 2013, and will be available online or at Trafalgar Studios box office. Additionally, day seats will be available at £10 for all performances, Tuesday through Saturday.

Director, Jamie Lloyd said "I am thrilled to announce the first production for Trafalgar Transformed - a season of politically-charged power plays on the doorstep of Whitehall, accompanied by a festival of platform events, discussions and readings. We hope to welcome new and diverse audiences to the West End and I am very excited to engage with schools and other groups via a series of bespoke workshops and masterclasses."

Howard Panter, ATG's Joint CEO and Creative Director said "we are delighted that, as part of our partnership with Jamie Lloyd Productions, ATG is to welcome James McAvoy in the role of Macbeth. As the first production in Jamie Lloyd's season of work for Trafalgar Transformed, we are thrilled that this bold production of the Scottish play will blast the roof off Trafalgar Studios, bringing an electric energy tothis theatre. It's a great pleasure to be starting on this exciting journey with Jamie Lloyd, a truly talented director."

James McAvoy was last on stage in 2009 in Three Days of Rain (Olivier Award nomination) at the Apollo Theatre directed by Jamie Lloyd. Other stage credits include Breathing Corpses at the Royal Court, Privates on Parade at the Donmar Warehouse and Out in the Open at Hampstead Theatre. McAvoy can next be seen in Danny Boyle's Trance, Welcome to the Punch, The Disappearance of Eleanor Rigby, Filth (2013), and X-Men: Days of Future Past (2014). James's film credits include X- Men: First Class, The Conspirator, Gnomeo and Juliet, The Last Station, Wanted, Atonement (London Film Critics Circle Award, Empire Film Award, Richard Attenborough Film Award, BAFTA nomination, Golden Globe nomination), Becoming Jane, Starter for Ten, The Last King of Scotland (BAFTA Scotland Award, BAFTA nomination, London Film Critics Circle nomination), The Lion, the Witch and the Wardrobe and Bright Young Things. In 2006 James won the BAFTA Orange Rising Star Award. McAvoy's television credits include Shameless, Macbeth, Early Doors and State of Play.

Jamie Lloyd's theatre credits include Cyrano de Bergerac at the Roundabout; American Airlines Theatre, Broadway, The Duchess of Malfi at the Old Vic, She Stoops to Conquer at the National Theatre, The Faith Machine and The Pride (Olivier Award for Outstanding Achievement) at the Royal Court, Inadmissible Evidence, The 25th Annual Putnam County Spelling Bee, Passion (Evening Standard Award for Best Musical) and Polar Bears all at the Donmar Warehouse, Piaf at the Donmar/Vaudeville/Teatro Liceo, Buenos Aires/Nuevo Teatro Alcala, Madrid (Hugo Award for Best Director, Clarin Award for Best Musical Production and ADEET Award for Best Production), The Little Dog Laughed at the Garrick Theatre, Three Days of Rain at the Apollo Theatre, The Lover and The Collection at the Comedy Theatre, Elegies: a Song Cycle at the Arts Theatre, The School for Scandal at Theatre Royal, Bath, Salome for Headlong, Eric's at Liverpool Everyman and The Caretaker at Sheffield Crucible and the Tricycle Theatre. Jamie was Associate Director of the Donmar Warehouse from 2008 to 2011.