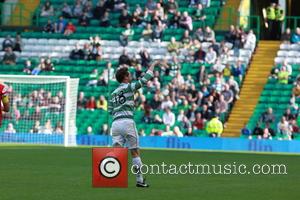 Hollywood actor James McAvoy showed off his sporting skills by playing in a Scottish celebrity soccer match over the weekend (06-07Sep14).

The Atonement star joined a squad for the game at the Celtic Park stadium in Glasgow, Scotland on Sunday (07Sep14) to raise funds for a number of good causes, including War Child and the United Nations Children's Fund (Unicef).

During the game, MCAvoy scored a goal to help the team led by retired Scottish soccer player Paul MCStay to a 3-2 victory over a squad led by sports star Rio Ferdinand.

The actor says of the feat, "It was like a weird dream. I couldn't believe it even when I scored."

One Direction singer Louis Tomlinson, along with 24: Live Another Day star Ross MCCall, also took part in the event.