The upcoming romantic drama The Disappearance of Eleanor Rigby is the pinnacle of a number of years’ work by debut director Ned Benson.It’s an amalgamation of three films telling the same story, the first two which, were screened at the 2013 Toronto International Film Festival and billed as ‘works in progress’. The addition of a third part, called Them, makes the whole of The Disappearance of Eleanor Rigby. 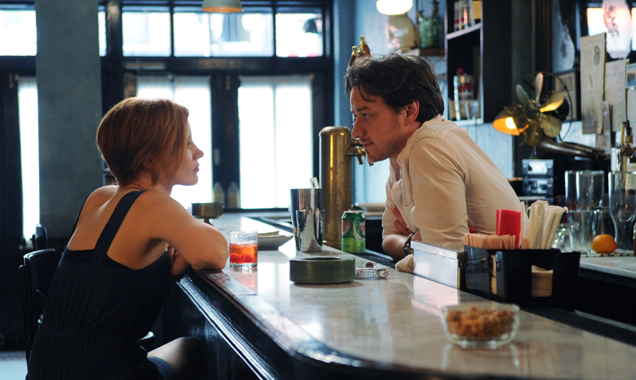 The basic premise – girl and boy fall in love, get married before running into various obstacles in their relationship – is as old as time itself, but the innovation that Benson brings is in the structure and format.

Disappearance stars James McAvoy (Connor) and Jessica Chastain (the titular Eleanor) play a young married couple living in New York. Connor works in a restaurant while Eleanor returns to future education, but a life-changing event threatens the stability of their relationship. The story is told from the perspectives of both characters.

The film also stars Viola Davis, Isabelle Huppert and William Hurt. The script was written by Benson, and work has been under way on the shooting of the separate parts of the project since February 2012.

More: The Avengers vs X-Men? James McAvoy wants to see it

Meanwhile, McAvoy recently celebrated the box office success of the rather more mainstream blockbuster X-Men: Days of Future Past, in which he again shares the role of Charles Xavier with Patrick Stewart.

Chastain’s career is picking up steam with the release of Disappearance, and her performance should see her stock rise again after memorable performances in 2013’s Mama and 2012’s political thriller Zero Dark Thirty.

The Disappearance of Eleanor Rigby is released in cinemas on September 12th.

Watch the trailer for The Disappearance of Eleanor Rigby here: